It's days like this that we feel a sudden wave of helplessness consume us. How can a nation this small contain so much sufferings and pain? It seems that no matter how much we do, how many dogs we rescue, how much money and resources we spend on saving lives, there are still so many dogs out there fighting for their lives. The luckier ones receive help in time while the not so lucky ones die a lonely death. Is our mission to rescue, rehabilitate and re-home needy dogs unachievable? Sometimes, we can't help but feel so small and helpless in this world.

Just yesterday, we received news on another shocking case. A man wrote to us seeking help for a dog he found a few days back. Based on the photograph he sent us, the dog looked so grossly emaciated and terribly sick. His ribs were jutting out from under the skin and his eyes were dull and devoid of zest.

According to the man, the dog has not eaten for five days and he has been extremely weak and listless. His pee and poo also contained traces of blood. Judging from the signs, we knew this would be a complicated case and the dog would require immediate medical attention.

Our volunteers arranged for food to be delivered to him, as well as for the dog to be taken to the vet immediately - the kind man who rescued the dog has financial difficulties and can barely provide food for the dog - and to take him to a trusted vet for a medical check up. We felt a lump form in our throats the moment we laid eyes on the dog. Laying weakly in the carrier was a dog so skinny his skin was clinging to every joint and every bone. We haven't seen a skinnier dog other than Prince. Clearly, he was nearing death. This was supposed to be a local dog, and a full grown local dog usually weighs 15kg to 25kg. This one weighed a mere 8kg.

Before he entered the clinic, we ran a parvo virus and distemper test on him, just in case he was carrying something contagious. However, these turned out negative. He was then given a hosts of tests. It was terribly sad when the vet could not even poke her needle into his skin because his skin had hardened, he was grossly dehydrated and she could barely squeeze an ounce of blood out of him.

While waiting for the tests results, the vet said that she suspects the dog hasn't eaten for weeks so we tried giving him food and water but he refused the food. He seemed to be struggling with his sense of smell. We then tried to put food directly into his mouth but it didn't help as he didn't know how to swallow the food. Perhaps he had gone without food for such a long time that he had forgotten how to eat?

Above all, his sense of sight and hearing also seemed to be affected. How can a dog that is barely one year old be in this state? We can't imagine what life was like before he was rescued by the kind man.

Was this dog kept in a home, neglected and then abandoned in an industrial estate? Did he live in a forest on his own and somehow found his way into urbanization? We don’t know. All we know is that he has been suffering for a long time to have been reduced to this state. His heart is strong, but his body is weak.

Apart from being severely dehydrated and anemic, results of the blood test showed a high white blood cell count which is indicative of an infection in his tiny body. His stool also contained a lot of bacteria and his liver reading was abnormal but the vet said that it isn't worrying at this stage.

What would most likely kill him is his low body temperature and severe dehydration. Right now, he is currently being placed on drips with antibiotics, glucose, and multi-vitamins to help boost his immunity. As for his low body temperature, the vet has placed heat pads and heated body bags around him to help keep him warm. The vet staff will also try to force feed him to make sure he takes in some food.

At the moment, we are still pending some medical test results but it is likely he may also be down with mites or ringworm infection. Results will be shared with you in due course when they are out.

When we filled his hospital admission form, we couldn’t even write the colour of the dog – he has no fur and his skin has hardened. A volunteer commented that his skin was rough like sand paper. . .  . . 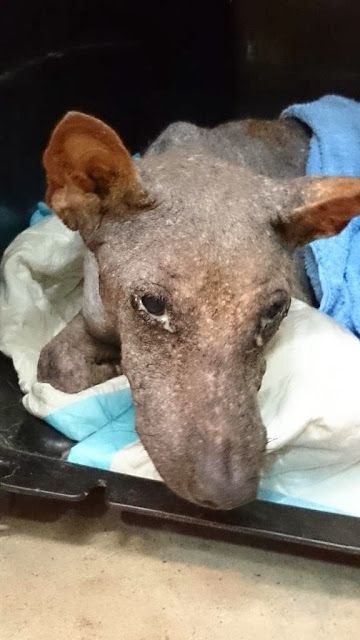 For now, there is little we can do other than to encourage him to fight on, stay by his side, and to let him know that this world we live in has love and that he will be loved.

We named him Elmo. Stay with us, Elmo. Please hang in there. We promise that life will only get better from here on.

To help with Elmo's vet bills, please email hopedogrescue@singnet.com.sg.
at 03:23