Cry Of The Innocent

Update: Dear Fellow Animal Lovers, thank you for your concern, love and support for Prince. Should you wish to contribute and help with his vet bills, please go down personally to Mount Pleasant Animal Hospital at 232 Whitley Road, S297824 (click for directions). Opening Hrs - Sat: 12pm-3pm, 7pm-10pm Sun:2pm-7pm. Please tell the clinic that you would like to contribute to "Prince's" medical bills under Hope Dog Rescue's account. We apologize that it is not convenient to visit Prince but please rest assured we will arrange a "Meet the Prince" session when he is healthier. Thank you everyone for your kindness. With gratitude, Fiona.

On 15 April, one aunty brought her dog to a neighbourhood vet for medical treatment. Upon arriving there she saw a skeleton dog inside the vet facility.

The vet told her that a breeder sent it to him to be put down. The aunty was very concerned about the poor dog as he looked young and looked like a poodle. He was totally shaved so she could not tell properly. The dog gave a soulless look at the aunty resigning his fate. The aunty not knowing what to do call her friend for help but they were helpless. Finally, they remember reading HOPE Dog Rescue and decided to try and see if any help could be rendered to the soulless poodle.

The next day on 16 April, they called HOPE Dog Rescue who immediately went to collect the dog from the aunty and sent him to a vet for full medical check-up. 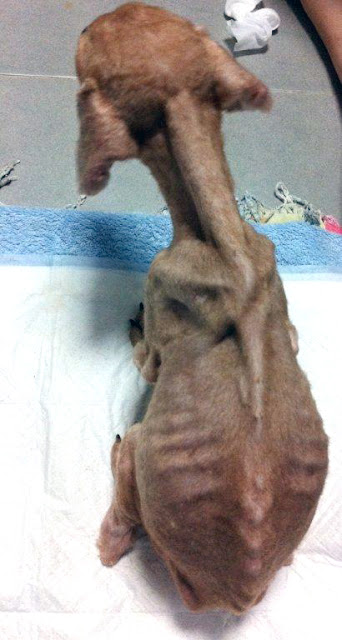 
My years of animal rescue did not prepare me for this. What I saw was shocking, upsetting and extremely painful. As soon as I laid eyes on the tiny skeletal of a dog, tears welled in my eyes. My heart hurt so badly from the pain, misery and torture I could feel from him. Imagine being reduced to this state; it would have taken months of animal cruelty and months of starvation to bring a dog to this skeletal state.

Anger surged through me that someone so cruel and heartless could bear to do this to a sweet little defenseless dog. If they didn’t want him, they could have just given him up. Why torture him and reduce him to this pathetic state before sending him to the vet and asking the vet to euthanize him?

A lady, who happened to be at the vet with her dog, saw and felt sorry for him. She paid for his initial bill ($187) and took him out. She brought him home for a bath, had his wounds cleaned and handed me the dog when I met her after work. She told me that he had already seen the vet and passed me an entire plastic bag full of liver supplements and probiotics. I looked at his body; he didn’t have an ounce of fat on him and the lower part of his body was covered with open sores, some weepy and deep looking. These were pressure sores caused by sitting in a cage for years and the fact that he was mere skin and bones didn’t help him. He was in great pain.

I lifted his lips to check the colouration of his gums; they were very dull. He was severely anemic and probably had tick fever. I immediately told her he had to be rushed to the vet again.

And that was how little Prince and I ended up at the vet together, me wondering if he would leave his tiny pain wrecked body while in my arms.

He weighed a mere 2.8kg. He looks like a brown / apricot poodle. He had been shaved bald probably by whoever who did this to him. I suspect he must have been tick infested and shaving him was the easiest way out. Without any fur, his entire body was a bag of bones. While waiting for the vet to see him, I felt him struggling to breathe. I felt him dying in my arms. I prayed that he would not give up, that he would hang on. I kissed his tiny head and told him that the fact he was in my arms, meant that he would be saved and I believe he might have heard me.

Dr Heng saw him and was appalled by the sight of him. Blood tests and other checks were done on him and perhaps these were the reasons he was sent to his death.

· Kidney failure
· Liver failure
· Tick fever
· Mycoplasmosis
· Severely anemic – Packed Cell Volume (PCV) for dogs is 35 in the normal range. Anything falling below 15 would usually require a blood transfusion. Prince’s PCV was a mere 10.
· Auto-immune problem
· Malnourishment – weighs only 2.8kg
· Right eye may be blind – either from a cataract or neglect – we have not had his eye checked thoroughly yet as our priority is to save his life
· Pressure sores on his testicles and rump

Dr Heng asked if he was still eating. The lady had fed him some rice, which he did eat. Dr Heng then told us to take him back and to return for another blood test 3 days later. We then took Prince to Karen’s home for fostering. Karen had previously fostered Moose and George for us.


At the foster home, we were in for a greater shock! Prince didn’t know how to walk, neither did he know how to lie down and sleep! It was a sorry sight as we saw what we did – he just sat in awkward positions and dozed off. Watch the videos to see how Prince sleeps. 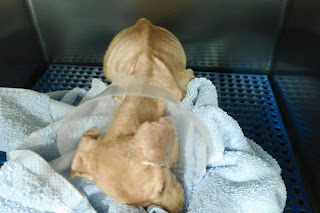 We tried flipping him sideways, holding him down and he would fall asleep but once we moved our hands, he would jump up in fright and go back to his sitting position. He doesn’t really know how to walk either. He eats, sleeps, pees and poo in the same place. Foster Karen has put many towels beneath Prince so he feels more comfortable and we tried moving him a foot away from his towel, he will immediately crawl back to his towel and sit again. He doesn’t know what to do with his newfound freedom or space, he doesn’t know how to walk and he doesn’t know how to sleep. This is how he whiles his days away: 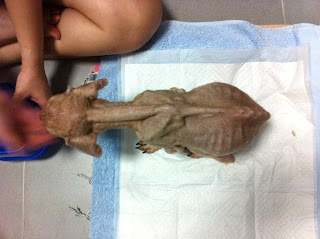 
Saturday morning, fellow volunteers, Rina and Lisa, met me early in the morning to take Prince to the vet (Redhill) for a re-check on his blood count. To our dismay, his blood count was still way below the normal range, and Dr Teo said a blood transfusion was necessary. She also recommended he do an ultrasound on his spleen.

We desperately started calling friends and posting on Facebook looking for canine blood donors. Donor dogs need to be over 2 years old, 25 kg and above, and be up to date on vaccinations and HeartGuard. Dogs, like humans, have several different blood types, and we needed to do some blood typing to determine our dog’s blood type and then do a cross match. The vet at Redhill did not have the facilities to do so, and we had to rush down to Mt Pleasant Sunset to do the blood typing. All this while, little Prince was sound asleep in Rina’s arms, nicely wrapped up in a towel like a baby.

Prince Receives A “Favor”
Desiree called to offer her dog, Favor, for a blood transfusion. Favor is a local Singapore Special, 3 years old and healthy. He had previously done a blood typing so Desiree knew what his blood type was and it was a perfect match for Prince. A match on the first try, this was Prince’s lucky day! By this time, the clinic was closing, so again we had to go to yet another vet. We booked a cab for Desiree and Favour, and told them to meet us at Mt Pleasant’s main branch as they would be open 24 hours and little Prince could immediately start his blood transfusion and have the ultrasound done. The entire process would take up to six hours.

Prince was seen by Dr Nandini, who was almost in tears when she saw him. Volunteers Rina and Johnathan sent Desiree and Favor home after he gave Prince 200ml of his blood and saved his life.

Prince may be warded at the vet for a couple more days as he is running a temperature. His PCV has gone back up to the normal range and is now 38. His platelet count is still far from normal and we are looking into ways to increase that.

Our volunteers and our friend, Effi, have been to visit Prince daily, carrying him and assuring him that everything will be alright. Prince needs to be hand fed as he doesn’t seem to know how to eat on his own. He is wearing an e-collar to prevent him from licking his sores. The staff at the hospital feel sorry for him so they removed his e-collar in the hope that he will sleep as they too have seen how poor little Prince sits all day in the cage, like a statue, nodding away. Effi bought Prince a nice cozy little bed and when she visits, she wraps him up in a towel, much like a baby and pats him to sleep. He is still learning to sleep lying down. 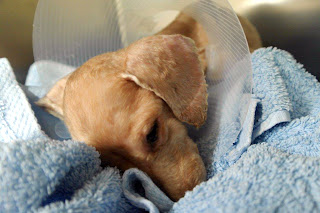 Prince has a long, long road to recovery. He needs to gain lots of weight and when he is stronger, we will have his kidney, liver and eyes checked thoroughly. For now, we just want him to pull through and be well.

We named him Prince, and so he shall live like one from now on. Prince’s life can only get better. He has had many friends show him love and care. Special thanks to Karen (foster) who can’t wait to take Prince home to fatten him up, Effi who has been visiting Prince everyday and helping with his medical bills and Francesca, whose valuable advice and support I always treasure.

From the bottom of our hearts, we would like to thank Desiree for allowing Favor to donate blood and saving Prince’s life. Without them, Prince might not be alive today. We would also like to thank Alycia Yee and everyone else who had contacted us to offer their canine companions’ blood to save Prince. Thank you!

If you would like to contribute to our work, please email fiona@hopedogrescue.org Your kind contributions will allow us to continue saving and helping all these innocent victims. We don’t want to have to say NO to a dog or cat just because we are limited by funds.