We Are Hoping For A Miracle

What can you do when the odds are against you and there’s nothing left to go on but hope? Hope that someone sees the pain you’re in, hope that help will come and hope that there’s indeed a light at the end of the tunnel and brighter days forevermore. This is the story of sweet determined Harper.


You can’t choose how you were born. If that’s the case, every dog would be born in a loving home with a name, a family to return that love tenfold to and a long healthy life ahead of them. Unfortunately for Harper, a six-week-young puppy, she was born in a filthy, dangerous construction site, without any food or shelter. Life dealt her an even harder card as she can’t use her hind legs. Since her birth, she has simply survived by crawling on her chest and dragging her hind legs over rough gravel and dirt.
We got to know about her situation from Mr Aziz who used his friend’s handphone to capture a photo of the pup and sent it to us at 8pm. At first glance, it looked like the puppy had a broken leg because of the way she was dragging her hind legs. Despite being low on funds and the astronomical charges of a late night visit to the vet, we decided to meet Mr Aziz at the vet with the puppy as we were more concerned about the great pain she would be suffering with a broken bone.﻿
For those who don’t know Mr Aziz, he is a kind Muslim man who feeds strays at his worksite with food supplied by HOPE on a monthly basis and he was the one who informed us about Matthieu.
He said he had to work till 9.30pm so we said to just call us when he ended work. He then called later at night and told us that the puppy’s condition was more like Matthieu’s as she could not walk and was simply dragging her little body. A Thai worker who knew that Mr Aziz loved dogs told him about the puppies. There are actually ten of them from different litters and one had been crushed and killed by a heavy vehicle just this afternoon. Such is the harsh reality of life on the streets, unforgiving whether you’re an old sickly dog or a young healthy puppy.

﻿He put the puppy into a box for transportation and she made no sound at all during the long journey from Jurong Island where he worked, to the vet clinic. After arriving at the vet, he asked if he could stay with the puppy. We were very touched knowing how he had just finished a hard day of work. In total, we spent almost two hours at the vet that night.

Watch little Harper's video here : http://www.youtube.com/watch?v=NuqO7UA_iLg&feature=youtu.be
While waiting for the vet to arrive, the vet tech fed the puppy some canned food which she ate but still did not stand. She had diarrhea after that and her excrement was all black. Mr Aziz did not hesitate to clean her up even after we told him to leave it to us to clean as he is Muslim after all but he truly didn’t mind. We were touched by his love for an animal that he just found.﻿
﻿The vet tech then washed the puppy as she had poop on her hind legs and he commented that she could have been born this way as there were no visible injuries on her. Mr Aziz also added that she made no sound while in the lorry, nor showed any signs of discomfort or pain.
﻿

When the vet arrived, upon our request, she did a blood test for distemper and parvovirus which the little puppy, thankfully, was negative for. Then we did a second x-ray after the first came out blur. While waiting for the results, the vet examined the puppy and noticed an ulcer in her right eye which explained why her eye was only half opened and teary. It didn’t help that she was dirty and dusty from the construction worksite. 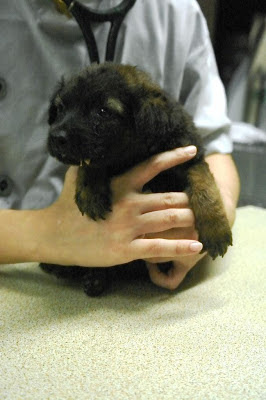 The vet informed us that some puppies walk like a drunk when they are very young as they are still unsteady on their feet. But she estimated her to be only six weeks old and said she’s very small for her age and too unsteady so it’s obvious that her growth was not very normal.

While waiting for the x-ray results, we chatted with Mr Aziz who had become a good friend of ours, as we’ve known him since Matthieu’s rescue. He had visited Matthieu a few times at the clinic and at his foster home. We also send food to him on a monthly basis to feed the strays at his worksite. (If you’d like to donate to support our efforts in providing for the strays in this area, please do not hesitate to contact us.) Mr Aziz cradled the puppy like a baby in his arms and even wrapped her in a towel so she would not feel cold as she was trembling very badly, from both fear and cold. He talked to her in Malay and told her to rest and that everything would be alright. He said he has told his colleagues many times whenever he sees them using sticks to chase or scare the dogs away, “these dogs have very hard life. If you don’t like, you just go away. Don’t need to beat them.” Such is the kindness of Mr Aziz.

He said he loved all animals and you could see the sadness in his eyes. He looked tired from a hard day’s work and yet, all he cared about at that moment was if the puppy would be okay.
The x-ray showed no cracks or fractures but there was an abnormal hump on her spine which the vet said looked like Spina Bifida, a condition that shows hind-end weakness, poor muscle tone, incontinence, incoordination and abnormal use of the tail. If it were true, then it means that the puppy will never walk again. We wanted to know if the puppy had control of her bowels and bladder but the vet said that she couldn’t tell unless she’s closely monitored for a week or so. Although she had diarrhea after she ate, she just dragged herself away using her two front legs.
We also noticed a callous-like bump on her chest, developed as a result of her dragging herself over a long period of time. What a tough life for a six-week-young puppy. It’s fortunate that the bigger dogs didn’t pick on her, as she would not have been able to escape them. The x-ray also revealed gravel and metal pins in her stomach. Can you imagine how hungry she must have been to have no choice but to fill her little stomach with these objects in order to quell that gnawing hunger? Thankfully, the gravel has already travelled down to her intestines and hopefully, she will pass it out naturally without the need for surgical intervention. Her stomach is also very distended which shows a possibility of worms and lots of gas. She is slightly anemic as her gums are pink but her tongue is pale. This could be from malnutrition.
﻿

While we were waiting at the vet, we shared the news of the puppy’s condition with the rest of the team. Fellow volunteer Lisa then found a link on a dog named Harper. While the case was not identical, it inspired us to name this little one Harper, in the fervent hope that a miracle will take place for her and she will, someday, walk.

Mr Aziz said if the puppy cannot be saved, he would bring her back to Jurong Island where she was found. How could we possibly let that happen? We are known to save every dog that comes our way. But if she really has incontinence then we may have to make a tough decision. We already have problems rehoming sweet, normal local dogs, what more a special needs local dog?
The puppy was warded for the night and before he left, Mr Aziz wrapped her up in a towel so she wouldn’t feel cold and can have a good night’s sleep.
We will be taking her for a second opinion on Monday to confirm if she really has Spina Bifida and the steps we can take to help save little Harper.
We cannot emphasize enough the hard lives that strays often have to endure and how we only pay attention to them when something terrible truly happens and in this case, that’s little Harper’s tragic condition.
Just for that night’s consultation, the initial vet bill is already almost $800. She will be staying for a day or two while we find a foster who is willing to take care of her. We also need funds to pay for a second opinion on her condition. If there’s anyone who can help her, be it through a cash donation or fostering or adopting her, please email Fiona (Fiona@hopedogrescue.org).
Against all odds, her silent cry for help has reached us. Everything happens for a reason so let’s all do the best we can for her. Although life was hard for her first six weeks in this world, Mr Aziz helped turn it around and now we have the ability to give her a better future and a shot at a more comfortable life. Together we can make a miracle happen for sweet little Harper who deserves so much more than this.
﻿

Written by Eloise Lee. Video credits Joceline Loo. (Thanks Joceline for working on the video till the wee hours.)
at 11:21