To our dear readers who have been asking about Babu Boy, we apologize for the delay in updating his condition. Your prayers, words of encouragement and support meant very much to Babu over the past trying weeks.

Today, we have great news! Babu has finally recovered from distemper! Although he can still shed and is contagious to other dogs for the next two months, he can now eat on his own and is ready to be discharged from the vet. Canine distemper is a highly fatal disease, so we are extremely grateful for this miracle and very proud of Babu’s strong fighting spirit. Thank you all for keeping him in your prayers.

During his month-long stay at the vet, we kept in close contact with Babu’s workers and were touched by how responsible and caring they were towards him. On some nights after work, Sharma would ride his motorbike to visit Babu, and his friend, Johnson, would go along. Since we promised Babu that we would gladly let him return to live with his friends at the construction site as long as he showed signs of improvement, we brought him home where he finally belongs. ﻿﻿﻿﻿﻿﻿

Usually, we will rehome the dog if he requires prolonged medical care (i.e. staying more than 10 days at the vet) so that the dog will not feel as if we are abandoning him after nursing him back to health. Since Babu is the first dog that we are returning to a factory instead of an adopter's home, it was our responsibility to conduct a "factory check" and ensure Babu's room at the factory was ready for his long awaited return. Moreover, as it was at a construction site, it would be extremely dusty and we needed to have it washed clean so that the dust would not affect his breathing or the stitches on his leg. We had initially planned to send a vet to Babu’s factory to vaccinate the other two female dogs, until we realized that the workers had already gotten a vet do so; Sharma showed us their vaccination cards. We know they might have lost trust in us due to the unfortunate turn of events in Babu’s case, but nonetheless, we were still touched and pleasantly surprised that they had made the effort to arrange for them to be vaccinated and to pay for the dogs’ vaccination.

As a further testament to their love for Babu Boy, the workers actually welded a metal kennel for him to minimize his movements. This is so that his legs can heal faster and his breathing will be less laboured. They even installed 3 wall fans in his room, washed the factory floor and cleaned the room in anticipation of his long overdue return! They bought a harness and leash for him, and refused to accept our money when we tried to pay them for it. It was then we knew in our hearts that sending Babu back to them was really the best decision we had made.

On the day of his discharge, a lot of logistics and coordination were required. As his disease was still highly contagious, only volunteers without pets were tasked to hold and carry Babu. Even so, wearing gloves was a must. Joanne ferried Babu in her company van, as it was not used to ferry other dogs. All volunteers and necessary items had to be religiously disinfected before getting close to Babu. The 10 of us anxiously waited 3 hours for his medication to be prepared, his feeding tubes removed, and other procedures completed.

We exited through the back door to minimize the risk of infection to the other pets in the clinic. Finally Babu Boy emerged and everyone cheered as though the King had arrived. It was a joyous yet tearful moment, as we had never expected that this day would come; to see Babu leave the clinic! He had undergone two leg surgeries and barely pulled through canine distemper. There were too many times when he fell so sick that we felt as though we were already losing him. Thankfully, Babu has proved us wrong yet again, for he is a real survivor. This just goes to show how resilient and hardy street dogs are. As he was hardly eating during his stay at The Animal Doctors, Babu had to be tube-fed. This resulted in a loss of 30–40% of his weight. However, we knew that bringing him back home to the worksite would inject the hope and optimism he once had in his life, and perhaps even whet his appetite for food, which he certainly needs. Just as we guessed, Babu ate as if he was compensating for all his lost meals – beef, mutton, boiled chicken and Magnolia fresh milk were all wolfed down in a matter of minutes. 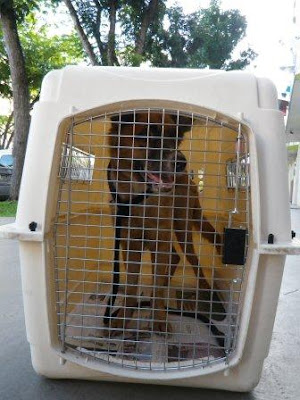 As we drove into the worksite, it was obvious that Babu knew he was home. His tail started wagging vigorously and he was excited. His teeth started chattering more as well. (Babu will forever have to live with his teeth chattering, a symptom of his days of distemper). Babu Girl was sitting near the main gate, on the gravel, patiently waiting for Babu. She had sensed his return. Animals never cease to amaze us. Sharma had told us all three dogs were named Babu. "Babu Boy, Babu Girl. One call Babu, all coming", according to Sharma. It was a cute theory.

When we arrived at the worksite, the workers were already waiting in eager anticipation. Carrying Babu to his room, we noticed the happiness and excitement in his eyes as they lit up for the first time in a long time. He sniffed the familiar scent that hung in the air; the workers crowded around to peer in from the windows just to catch a glimpse of the now very famous Babu.


We took about an hour to settle him into his new handmade kennel, and leashed him to prevent him from moving too much. Our volunteers then advised Sharma on Babu’s medications and provided some housekeeping notes.

HOPE Dog Rescue would like to give special thanks to Veronique and Joanne who visited Babu's worksite everyday with freshly cooked food and fresh milk, ensured that he had taken his medication, and checked that his leg was healing well. They continue to check on Babu regularly. We truly appreciate their generosity and kindness, as they had gone out of their ways numerous times for Babu.

We thank Sharma for taking such good care of the three Babus.

We want to thank our friends and volunteers who visited Babu, prayed for him, collected his medications, cheered him up and even soothed him from outside the door of the isolation room.

Lisa talking to Babu from outside the isolation room

Babu is eternally grateful for all your affections, kindness and generosity. You can be sure that he will certainly live a life with much more HOPE and happiness from now on.

Last but not least, HOPE would also like to express our special thanks to The Animal Doctors especially to Dr. Cathy Chan and her team of dedicated vet nurses.

Email ThisBlogThis!Share to TwitterShare to FacebookShare to Pinterest
Labels: Animal Stories, The Things We Do, Volunteers 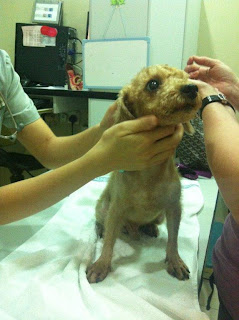 Prince has put on more weight – he is now 4.3kg. His sores have all healed nicely while the scarring on his right eye is slightly better. 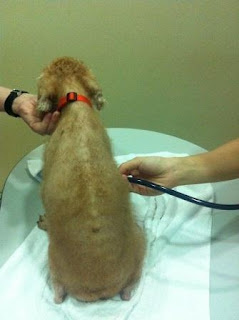 His blood still does not clot well, and so Prince bruises easily. Bruises can just appear and his foster has to constantly be on the lookout. He cannot play rough in case he knocks or bumps into something and bruises appear. He needs to be carried gingerly and cannot be held too tightly.

Some areas the foster is keeping a close watch on: black stools, which indicate serious internal bleeding (if this happens, Prince will need to be rushed to the hospital) and nosebleeds, which also indicate internal bleeding.
Prince is eating well and sleeps better. He has even learnt to play fetch!
Watch Prince preparing himself for bed 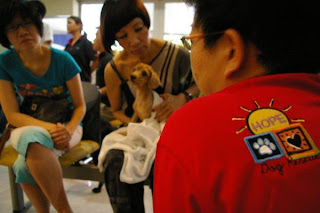 Thank you everyone for meeting Prince on Saturday (May 19) and loving him.

We thank Prince's fosters for taking such good care of him. 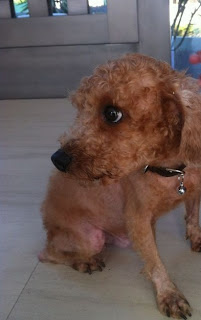 Prince in his foster home 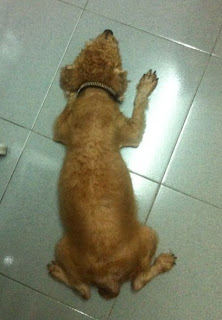 His tummy is getting rounder

Prince has been recovering well in his foster's home and his fur is slowly growing back. His foster commented that he has been quite a cheeky dog too, always pawing at her chair during meal times. He has even shredded bags of dog food. Despite that, we are so pleased that he is now behaving like a real puppy!

The vet mentioned that Prince's stomach has since gotten much bigger but this is certainly not to be mistaken for fat. As a side effect of his steroid medication, Prince's stomach will remain bloated for as long as he needs to consume this medicine. 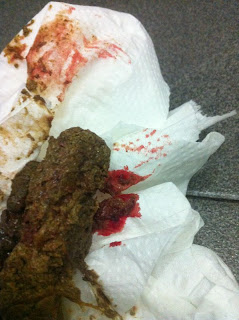 Blood stains in his poop

Prince had blood in his stools for a few days. The vet said there could be too much protein in his food or the medication could have been too strong. Further monitoring is required on this.

Apart from all this, Prince's health has generally stabilized and we are extremely pleased with his progress thus far. This little boy has indeed come a long way.

We thank everyone for all their love, concern, contributions and prayers. We will now channel our efforts to helping other rescued dogs that need our love and attention.

We strongly believe in NOT BUYING pets and NOT supporting puppy mills or pet shops that have sale of pets. If you or any of your friends are considering owning a pet, please email alicia@hopedogrescue.org

We have many dogs needing homes. Tell us what you are looking for and we may have just the dog for you. And you would have saved a life!
at 01:28