Do They Know It's Christmas?

Thanks to Doggiestyle Café and HOPE Dog Rescue, they might have known, even for just one night.
﻿﻿
Christmas is the season for HOPE and giving, and that's just what the fine folks at Doggiestyle Cafe have been doing. For the past month, they have been taking orders for special doggie log cakes and allocating part of the proceeds towards feeding the street dogs that HOPE Dog Rescue cares for. 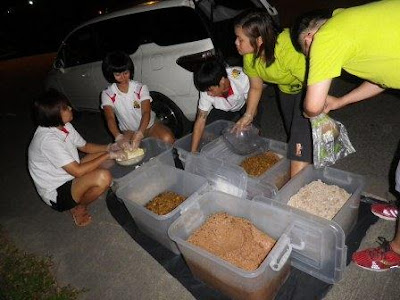 It took 6 staff of Doggiestyle Cafe 10 hours to painstakingly prepare the sumptuous feast for the dogs. No expense was spared that day. They used 332 cans of canned food, 40kg of kibbles, 5kg of rice, 150 eggs, and 26kg of delicious cooked liver and beef. The total weight of all that food was a whopping 87kg! 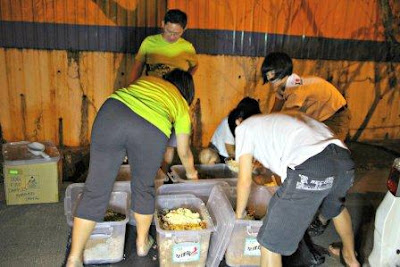 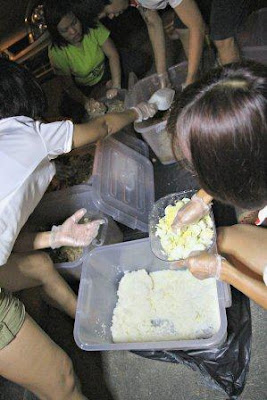 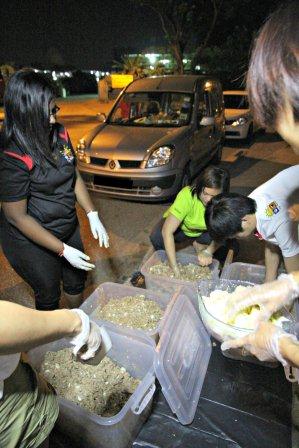 So on 27 Dec, the owners of Doggiestyle Cafe, Ivy and HP, and a team of volunteers from HOPE (consisting of Fiona, Lisa, Esther, Nicholas, Iris, Buven and young 11-year-old Megan) went down together to deliver the feast to the street dogs. It took 3 hours to get every dog fed, and everyone was smiling the whole time. 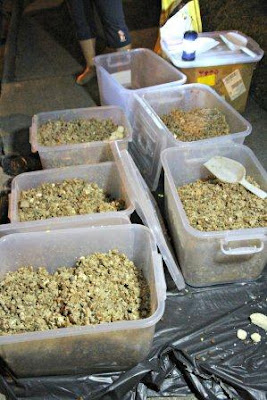 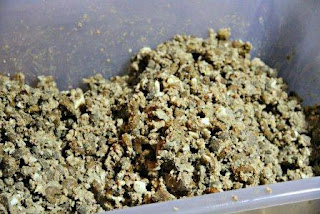 Christmas is a time for happiness, and for helping the less fortunate. While most of the world was celebrating Christmas at home, warm and cozy with their families around a glittering tree, our furry friends were wandering the streets like they do any other day of the year, sniffing the ground and wondering where their next meal would come from. Although they may not understand the meaning of Christmas, it was a privilege to be able to bring them that tiny bit of joy with our hearty Christmas feast this special time of year. 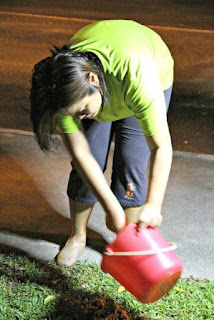 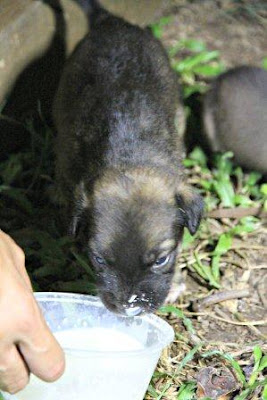 Dear canine friends, you were not forgotten this Christmas. We hope we succeeded in bringing you some holiday cheer and making you feel special and loved, if only for the one day this year. We look forward to the year ahead with you, and we'll be working hard to make sure each and every one of you gets the life you deserve!

All of us at HOPE Dog Rescue would like to sincerely thank Ivy and HP at Doggiestyle Cafe for their initiative, and their wonderful customers for ordering the log cakes and supporting the effort. We wish you a Happy Christmas, and a Merry New Year!

Note : HOPE Volunteers feed the street and factory dogs twice weekly throughout the year, rain or shine. Should you wish to donate canned food or kibbles to these dogs that we feed, please email alicia@hopedogrescue.org and fill their empty bellies with a proper meal.

Written by Elena Lin. Photography by Esther Low.
at 03:43

When we went back to Singapore for my summer holidays, my mum suggested we volunteer with HOPE Dog Rescue. I was really looking forward to it as I love dogs and miss my dogs who have died.

On the first day, we were introduced to Mo Mo, Sparky, Oscar and Zeppo. I like Mo Mo the most. She is beautiful with her unique tiger-like stripes on her body and she is so, so smart!
﻿﻿
﻿
﻿﻿

I was a bit sad when Zeppo left as he had found a new home. But very happy for him that he would have people to love him and a safe place to be.

My time with the dogs was wonderful. I have never felt happier when I played with the dogs and took care of them. I felt sorry for them because they were so lonely and had no one to play with them all day. On one of the days when I was not there, it rained and I thought of them and how frightened they must be, with nobody to comfort them.

This has been the best summer ever because of the dogs and how happy and cheerful they are even though they are staying in the kennels. I HOPE that Oscar, Mo Mo, Sparky and Happy (the new dog) will find forever homes soon.

Christmas Is All About HOPE And Blessings

It's the time of the year to look back and reflect. To count our blessings. To give thanks.

Thank you to all who have given and helped HOPE doggies in one way or another. Even more so, to fosterers and adopters who opened their hearts and homes to our rescue dogs. You have enabled us to go on helping and saving more dogs.

Miracles do happen. We are one of the lucky few who bear testament to these miracles. Scotty, Oscar, Babu, Beano and so many more. Each rescue story is a miracle. We count our blessings to be involved in their amazing recovery stories.

We would like to invite everyone to share in our joy and pride in witnessing these miracles. See what a little love can do! 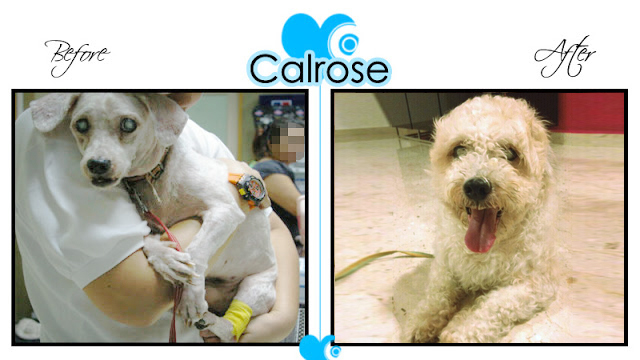 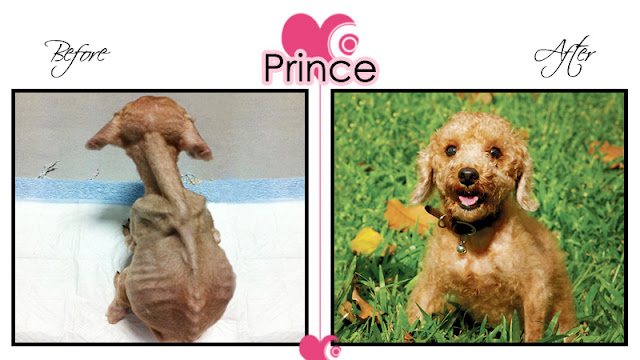 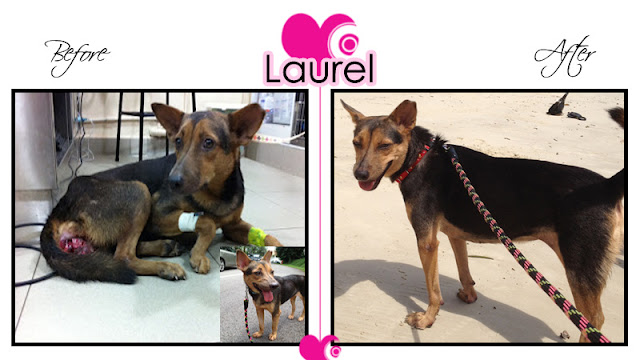 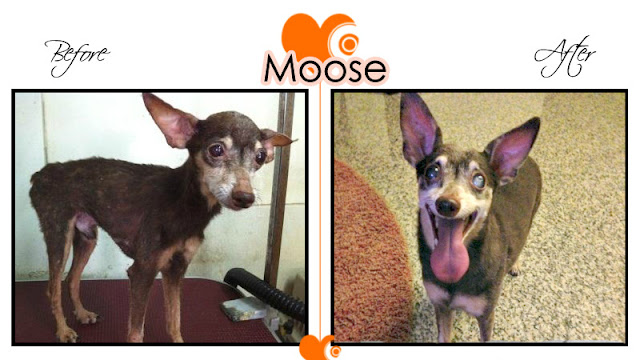 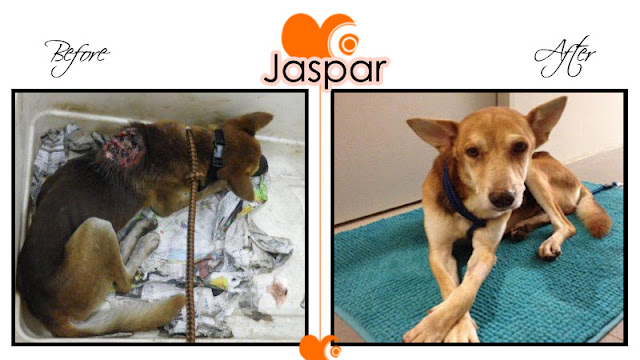 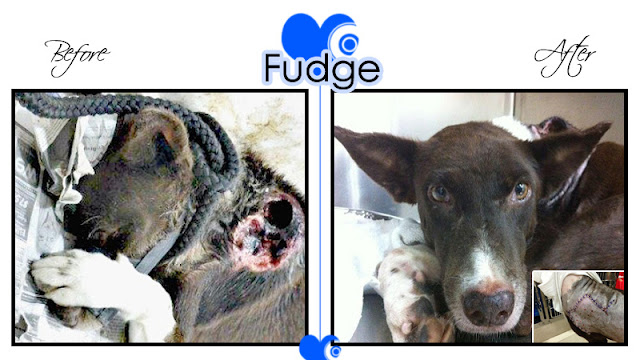 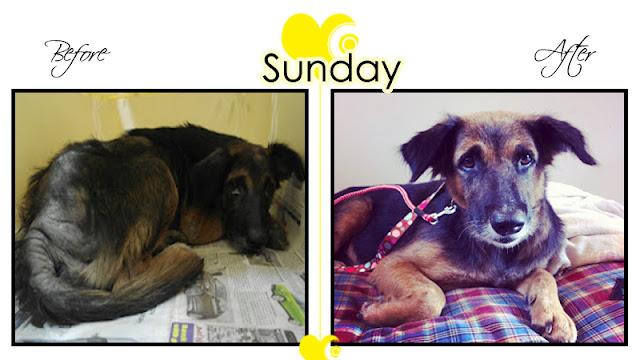 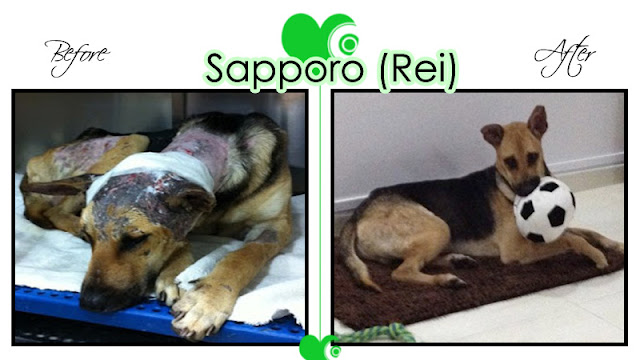 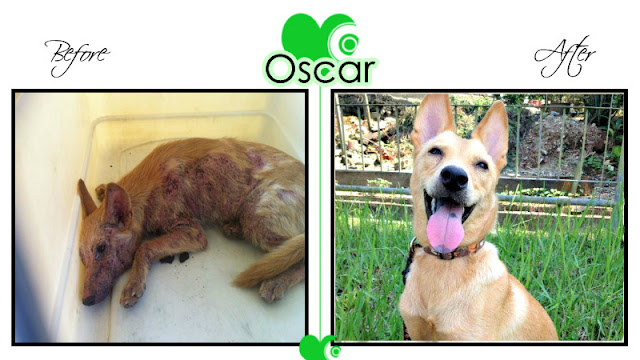 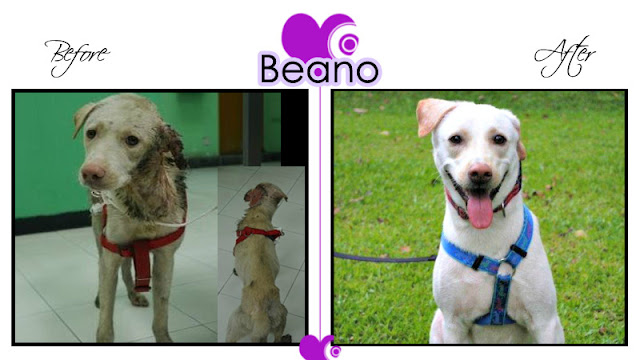 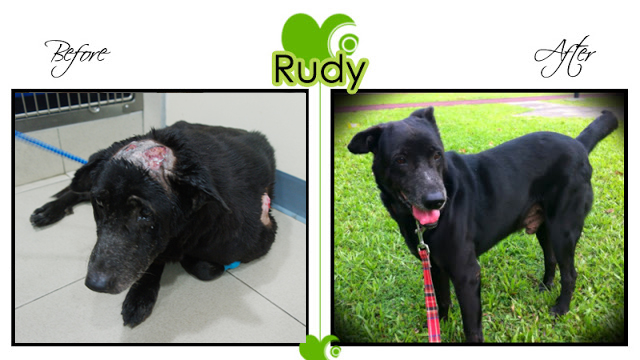 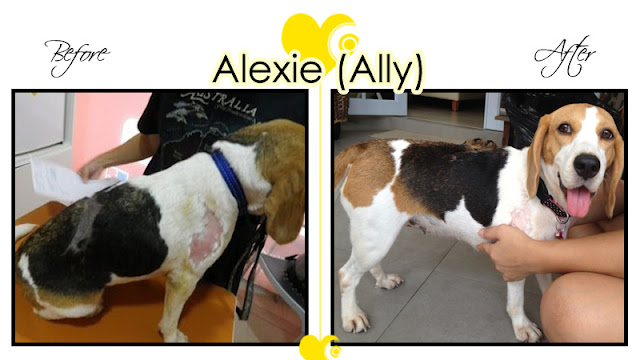 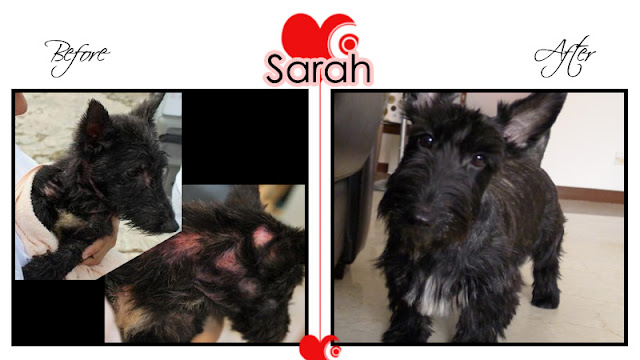 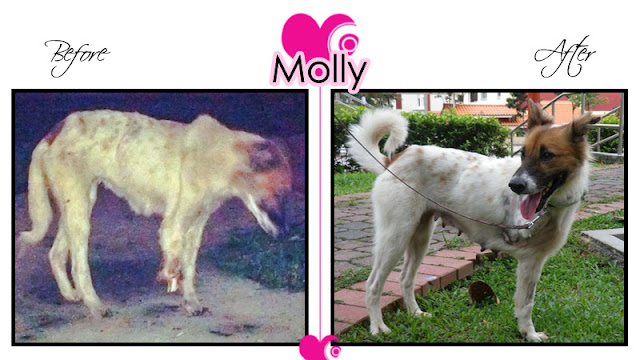 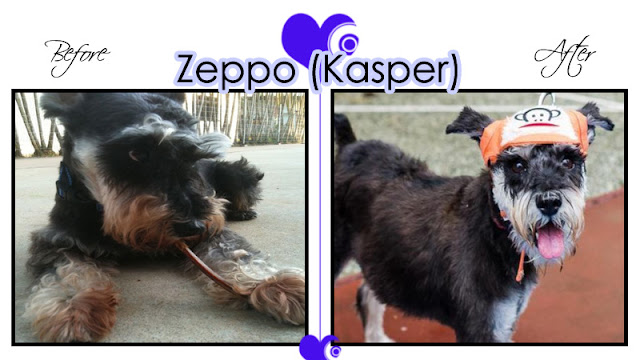 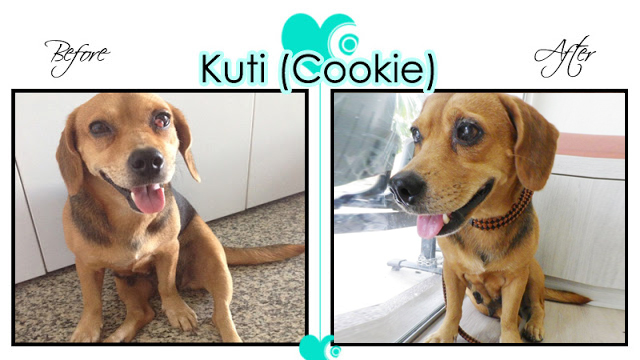 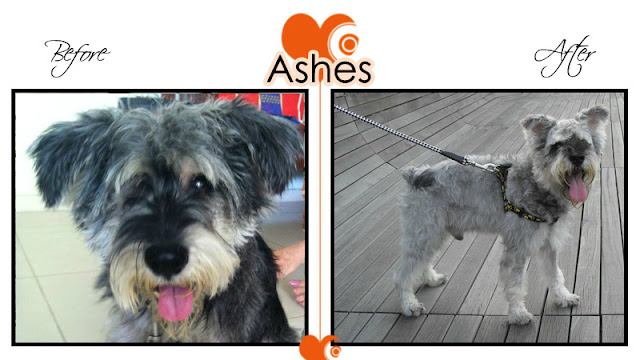 During this festive season of love, giving and merry making, let's not forget about the dogs that have been staying in the kennels for almost a year. They would have loved a home and a family this Christmas.


On behalf of all at HOPE Dog Rescue (including the doggies), we thank everyone who have been there for us and all the doggies who have shared their lives with us, we have been truly blessed.

Cheers to another year of more rescues and more miracles ahead. Let's save more doggies. We know that there are many out there who are waiting for our paths to cross.

Whilst you celebrate your Christmas, we will be out there rescuing more dogs.

Have a Happy Christmas and a Merry New Year! Woof woof to 2013!!

Email ThisBlogThis!Share to TwitterShare to FacebookShare to Pinterest
Labels: About Us, Adoption, Animal Stories, Rescued, The Things We Do

In the midst of searching for missing Molly, Lily and I were recalled from the search to rescue a puppy that's been ran over by a car in Jurong. It was close to midnight when we reached and the area was pitch black. We were surrounded by tall ominous containers and driving into deep rainwater-filled pot holes. Except for the stray dogs running around, not a soul was seen. No one is going to hear us even if we were to burst our lungs screaming. Fearing for our own safety, we harboured selfish thoughts of turning back. But edging each other on to keep going, we were finally rewarded with the sight of the injured puppy frantically wagging his tails gratefully.

And this grateful little puppy, we named Cooper.

Cooper was first noticed by a lady about a month ago, while she was feeding strays in that industrial area. Cooper was a timid dog and often hid under the container, refusing to come forward when called. However, he disappeared a week later and the security guards in the area told her that he had an accident. But as he was a stray, even though knowing that he had an accident, no one bothered to search for him. Life of a stray - a dog, a cockroach, what's the difference?

But luckily for Cooper, this kind lady spotted him again. However, this time she witnessed a car ran over him and sped off. (You will be horrified to learn that this is 6 months old Cooper's 3rd accident!) She actually saw the tyre run over the back of his tiny body, rendering him unmovable on the road. The poor little baby was howling and crying in excruciating agony. (Watch the video and when you hear his cries, you'll be crying along with him too.) And in desperation, she called HOPE Dog Rescue for help. 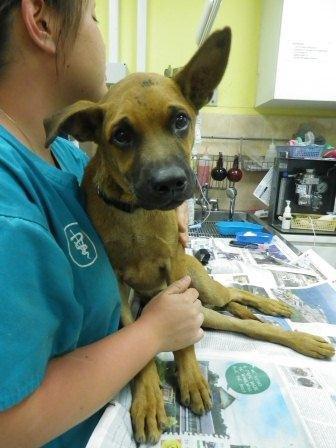 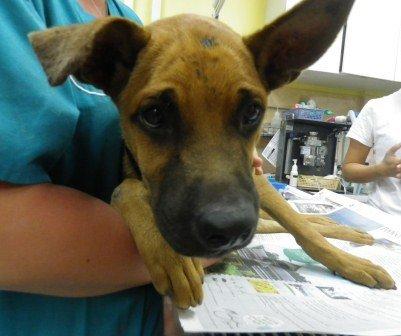 My heart went out to him when I first laid eyes on him. Despite the pain, he was so happy to see me that he tried to stand and come forward to me. Me - a complete stranger. He is so trusting and innocent. How he had longed for love and affection. I swept him into my arms and bundled him into the car. His fur was caked with a mixture of grease, sand and rainwater. He had never had a clean day in his life. When the car moved off, its jerking movement sent Cooper shrieking in pain. The poor boy was in obvious distress as we drove over the many humps and bumps as we rushed him to A&E in the middle of the night. I held him close and tried to lift him off his bottom to alleviate his pain. I crooned into his ears to reassure him and gradually I felt him relax slightly as he fell into a fitful sleep with his head buried into my neck. 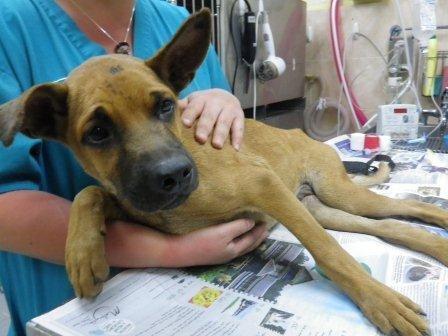 An x-ray was immediately carried out at The Animal Doctors and we found out that in addition to his current hip fracture, he had 2 different old fractures to each of his legs. The right leg had an old fracture that had fused back. His left leg also had an old fracture but this one, the bone had fused back in an awkward position. This made his left leg look swollen and about an inch shorter than the right. This however does not cause him pain and he is able to live with it. The sheer thought of a small 6 months old puppy suffering from 3 different episodes of fracture was extremely upsetting. He is just a baby and he had already gone through so much. Life on the streets is a harsh reality. The life and death of a stray means nothing to many.

Cooper needed an orthopaedic surgeon to repair his hip fracture and was thus referred to Dr Ben Landon, an orthopaedic specialist. Almost a week had passed and we noticed that his muscles were wasting away. We were also worried that his bones would fuse in the wrong place just like his left leg. So although we were severely short of funds, we decided that we could not afford to wait and arranged for surgery.

In the middle of the operation, I received a call to inform me that the surgery had gone on for more than 3 hours and try as they might, the bones on his right hip was shattered beyond repair. It is too dangerous for Cooper to be under general anaesthesia for that long and they needed to quickly finish up to wake him up. So the surgeon did the best he can to salvage by using the muscles to hold the bones together instead. The repair to his left hip was thankfully uneventful and it went very well. I was reassured that in spite of the condition of his right hip, Cooper will still make a wonderful recovery with good prognosis because of his young age and that he is not heavy. 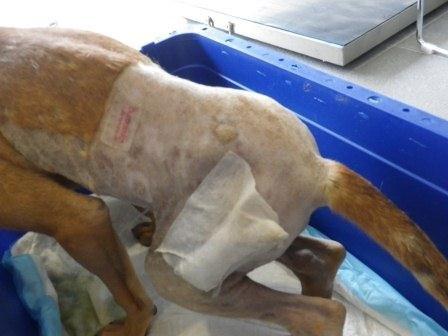 Cooper is now back in The Animal Doctors but he needs a foster / adopter as soon as possible. We cannot put him back onto the streets. He needs post-operative care and also needs to be confined to a small area to restrict his movement. He is relatively easy to foster as he is not a noisy puppy and is pee pad trained! He is an intelligent little pup and taught himself that!

The surgery fees and vet bills has amounted to a staggering $7000. All of us in HOPE Dog Rescue are having sleepless nights over his bills. Human kind has let him down enough, please don't let him down now too. Please email fiona@hopedogrescue.org to donate or adopt/ foster.