Uncle Seng And His Pets

Remember Uncle Seng and his pets? We just shared his story two weeks back.

His dogs, Mary and Audi, are sad and miss him greatly. Audi is being boarded commercially while Mary, who was like Uncle Seng's shadow, is currently at a volunteer’s home. We knew that Mary would be more affected by the separation than Audi and so thought that a home environment would help ease some of the stress. Unfortunately, it's not just a home environment that Mary needs, but Uncle Seng's company. At the volunteer's home, she was so scared and stressed that she did not eat for 2 weeks, not even force feeding her helped. She would either clench her teeth or spit out whatever we put into her mouth. All she did was hide and look miserable.


Last Saturday, on the day of our adoption drive, we bought breakfast for Uncle Seng and drove him to the event to visit the other dogs that had come from his factory, Amber, who is happily adopted, and Vera, who is still waiting her chance. Vera recognized Uncle Seng instantly and kept showering him with doggy kisses and refusing to leave his side for long. 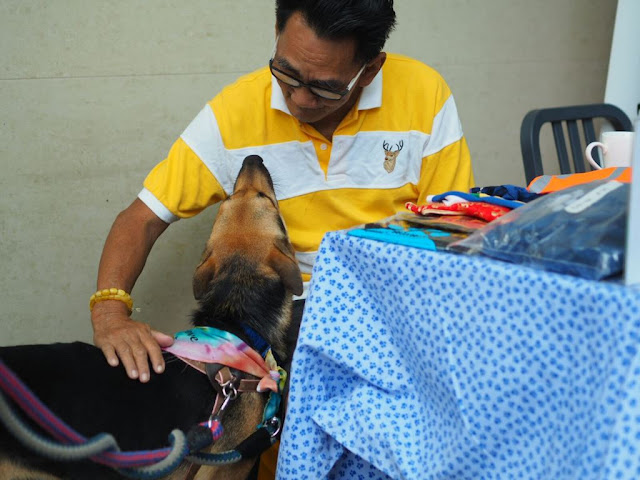 Uncle Seng spent the day with us at the adoption drive. We had just bought him lunch when we received news that one of his old cats had passed on. This cat had cat flu and was warded at the vet for 10 days. She was recently discharged to a commercial boarding facility because she was feral and not very friendly towards humans. Combined with her sickness, she made a challenging foster case. Her sickness was probably made worse by the stress of the change in environments, from "home" in the factory, to vet to commercial boarding, and she finally succumbed to it and passed on.

When we broke the news to Uncle Seng, he was visibly distressed. He just stared blankly off into space and kept asking how could the cat die. We immediately made arrangements for a volunteer to fetch him to say his
final goodbyes to the cat before her body was sent for cremation.
We desperately still need help with the following.

Uncle Seng entrusted his pets to us so we must to do our best to ensure their well-being. Today we brought Uncle Seng to visit his cat at vet. Unfortunately the cat is extremely ill and in isolation thus Uncle Seng could only visit the cat from outside. However, when he called the cat, she immediately recognized his voice and weakly lifted her head toward his direction.

Of course, we hope that we can find all of Uncle Seng's animals loving permanent homes, and they are all up for adoption. In the meantime, we seek fosterers or sponsors for their boarding. If you can help in any way, email hopedogrescue@singnet.com.sg.
at 01:42