How old are the oldest dogs you know? Maybe 18, 19? Are they enjoying their golden years, spoiled rotten by their owners and living a life of leisure? That's the life a dog should lead.

This is Crystal. Crystal is the oldest dog that HOPE has ever rescued, still tottering about at 20 years of age.

I first met Crystal about 8 years ago when I sent my dog to the groomer. There, I often saw her locked in a cage, and I heard that she was there for boarding. I did not know then, that her boarding would last almost half her life - almost a decade. Frankly, Crystal has been living in a cage for even longer than some breeding dogs.


Over the many years that I patronized the shop, I saw Crystal getting older, growing weaker, and losing the muscles in her legs from years of being caged without sufficient exercise. She became blind, losing her sight completely. One by one, all her teeth fell out. Now she's totally toothless, and her tongue hangs out. It’s sad, watching a dog grow old but not under ideal circumstances, and not being able to intervene.


I then found out that Crystal belonged to a Mr K, who was between jobs. He had rented a room where pets were not allowed. Since he could not take her home, she ended up spending half her life in boarding at a grooming shop, waiting for the occasional day that the owner would come and see her... and perhaps one day take her home. She literally spent half her life waiting, locked in a cage.


I often asked why the owner did not just rehome the dog. I was told that he loved her a lot and couldn't bear to part with her, but circumstances were such that he just could not take her home. And indeed, I've seen that he does love her a lot. It wasn't an ideal situation, but it was one that both owner and dog had learnt to cope with.

But Crystal has begun to deteriorate very quickly over the last 3 months. Each time I sent my dog to the shop for grooming, I would intentionally stay at the shop so that I could take her out of her cage and carry her out for a little walk and some fresh air. She loved it. She craved being carried and hugged. Remember that Crystal is blind. Blind dogs get assurance from physical contact, whether it's being carried, or just leaning on someone. I noticed that, by this time, her legs had almost no muscles left at all. She could hardly even hold herself up. She also seemed like she has dementia. Often, Crystal walks herself into a corner, gets stuck, and doesn’t know how to back up and get out – but at 20, this is to be expected.

In the last 2 months, my pity for her situation grew unbearable. How different was she really from a breeding dog, locked up for almost a decade, living and dying in a cage. I started bugging the shop owner to talk to Crystal’s owner, to let me take her home to foster. When she came back with a reply, she said that the owner needed time to think about it and was concerned that the shift to a new environment would stress her out and make her deteriorate faster. That thought did cross my mind too, but this at least meant that Mr K really did have Crystal's welfare in mind.

3 weeks ago, I started cooking for Crystal. Crystal had become skin and bones by then. The shop fed her dry kibbles and wet canned food, but I felt that, as a very senior dog, Crystal needed lots of extra care and attention. She should be having lots of small meals throughout the day. And she definitely should not have to stay in that cage anymore, standing and sleeping on those uncomfortable metal bars. I did the best I could to make Crystal's life at the groomer's more bearable. I brought her a lot of donated towels and asked the shop to line the base of the cage with them, so that the metal bars wouldn’t hurt her tiny frail paws. Again, I bugged the shop owner to let me foster Crystal.

Finally, on Sunday afternoon, I received the best of news. The shop owner said that Crystal’s owner would like to meet me! I practically flew down to the shop. We met and chatted for an hour, and I took Crystal home that same evening. I suggested for Mr K to come and visit Crystal at least twice a week, so that she wouldn’t be so stressed in the new environment. Anyway, he should take this chance to see her more often, because she's not getting younger.

When we got home, Crystal immediately started walking around, delighted with her freedom. She walked nonstop for an hour, skidded a bit, got stuck in corners, fell... etc. but yet she got up again and again, and happily continued to explore. She ate, and she slept. For the first time in almost a decade, she finally got to sleep on something padded (3 thick towels) instead of the cold hard floor of a metal cage. Over the next 2 days, I could feel her happiness and her contentment grow. She was grateful for her freedom, for love, for a home, and for comfort – all the things that were deprived from her for so long.

After a while, I noticed blood on the floor. Dismayed, I did a quick check, and 2 of Crystal's paws were red, sore and bleeding from years of standing on bars in that metal cage. As a result, her paws were also slightly deformed. In these first 2 days with her, I also noticed she circled a lot, and often to the right. I thought it stemmed from the years of being locked in cage, but I made a note to myself to ask the vet about it.

Yesterday, I took Crystal to see a vet – something that she had not done for at least 10 years. Mr K met us there. We just wanted to do a general check up to make sure that Crystal is doing okay.


At the vet, we realised that Crystal weighs a mere 2.8kg! She is so frail that you feel you might hurt her just by holding her. It reminded us of Prince and Ah Boy. After a blood test, we found out that she has a severe heart murmur, and severe anemia. Her kidney wasn't working too well either. There was also a wart on her left shoulder that often bled. The vet also remarked that her paws were bleeding from all that time standing in a cage - but we already knew that. What we didn't anticipate was that Crystal's circling behaviour could be the result of a brain tumor, which is common in Maltese dogs, and unsurprising in a dog her age. The vet gave us some supplements for Crystal, and recommended that we do a subcut (subcutaneous cut) for her every alternate day, which is like kidney dialysis for dogs to flush out toxins.

Her results were not terrible for such an old dog, but it still left me feeling gloomy at Crystal's plight. It's just so tragic that her life had played out this way. We should all be so lucky for our dogs to live to Crystal's ripe old age. Yet in all those years, what enjoyment did she have? Why did it even matter how long she lived, if all she had in life was that cage?

Perhaps it had been too long a day, perhaps Crystal was stressed with the vet visit, or perhaps it was the medicines or really a tumour in her brain, we’ll never know. But that night, at 1am, Crystal had a series of seizures. Each seizure lasted 6 seconds, and it happened 3 times in 10 minutes. I was worried sick. And when it finally stopped, she remained restless, circling. No matter how I tried to calm her down, it didn't work. If I carried her in my arms, she would struggle to get down so that she could start to pace and circle again. At the end of one hour, she was finally completely exhausted. I took the opportunity to put her to bed, but then she stood up and threw up her dinner. That was it, I scooped her up and rushed her to the emergency vet. But it was no use, the vet too agreed that it was impossible to identify the cause of her seizures unless they conducted many more tests. All they could do was to ward Crystal for observation. But I didn't want her to be put in yet another cage, and so I insisted on taking her home.

As I watched, Crystal slept like a log at home for almost 14 hours. When she woke, it seemed that she had lost her appetite. Now, her days are spent sleeping, walking around, and drinking water. I carry her in my arms each time she starts circling. When she has to be home alone, she is put in a playpen for her own safety. Since I took Crystal home, my alarm is set to ring every hour throughout the night. I wake up to check that she is still breathing, and if she peed in her playpen, I change her pee pad, clean her up and put her back to sleep.

I am dismayed at how much she has weakened, and I very much want to keep alive that little glimmer of happiness I saw in her when she first came home with me. It’s so amazing how one can bring home a dog, and just immediately fall in love with her and accept her as part of the family. 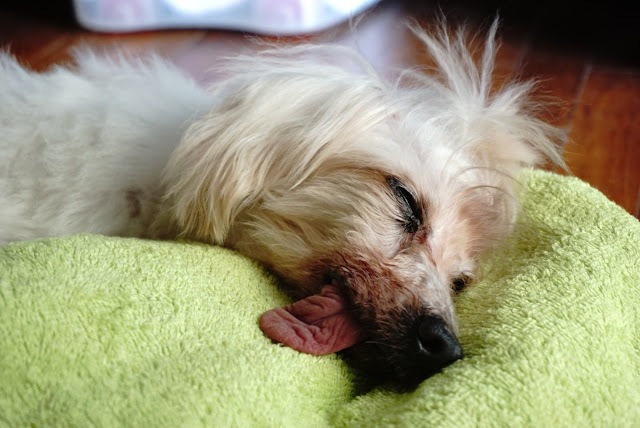 Mr K told me that he used to take Crystal to East Coast Beach when she was young; that’s on our urgent to-do list. I don’t know how long I have with Crystal, but I pray that she stays with us long enough to enjoy her newfound freedom. It is my greatest honor to know Crystal, and to have this chance to care for her.

Crystal needs pee pads (45cm X 60cm, and the bigger ones 60cm X 90cm) and wet tissues. Please help us to care for Crystal in her old age. If you are able to contribute these items, please get in touch with us at hopedogrescue@singnet.com.sg.

Clarification : The shop where Crystal was boarded did try their best to care for her. They let her out to walk about in the shop and customers also took Crystal out for fresh air :-)
at 02:04