Story from "Ariel Beanie - A part Of US!" Written by Ariel's family.

My family and I first came to know about Ariel and her other siblings through HOPE Dog Rescue's Facebook page. We took interest in the page describing the volunteers' efforts in rescuing Emily Bean and her cute little puppies. As my wife's birthday is fast approaching, with the kids' constant bugging to have a pet, it did not take us long to decide on adopting one from the organization.

To be honest, Ariel wasn't our first choice back then and most people would have already guessed the reason why... YES, it was because her colour was BLACK! Grandma was a traditional person and felt that black was an unlucky colour. We admit we were disappointed when we were told that the puppy of our choice had already been adopted. Nevertheless the whole family still made our way to view the available puppies and there Ariel was, sleeping with her eyes closed like an angel when the volunteers carried her out. When we first held her, she was snugging into our arms like a baby looking for warmth. My wife even commented that she had that "professor look" as her facial prints appeared similar to a puppy wearing spectacles. The first impression we got from Ariel was that she was not as active as her other siblings and would definitely be good for a family with young kids. After the family's discussion, we decided that she was the one. That was the first lesson that this little beanie taught us as a family... never to discriminate against a dog by its COLOR.

Ariel Beanie first entered our lives on 07 May 2015. The family was excited that night as we were all expecting her arrival, along with the preparation of her new sleeping area, together with some new toys. She was probably tired after coming out from the vet and slept peacefully throughout the night at her new home. Everyone was amazed at how lovely she was. However her puppy behavior began the very next morning.

It started out from whining in the wee hours to play biting, chasing and nipping at our children's hands and feet, destroying and chewing stuff all the way to barking at family members. It was a challenge for us parents as we have to handle both our young kids and taking care of this new puppy at the same time. We decided to clench our teeth and face the challenge head on by seeking advice from the volunteers and other dog owners that we got to know along the way. Constantly reading up and watching YouTube videos on the internet regarding puppy related issues have also helped us to understand more as to why Ariel would display such behavior and how to minimise it. Ariel's arrival has taught us parents to be MORE attentive, patient and understanding. This applies not only towards Ariel, but to our own kids as well. 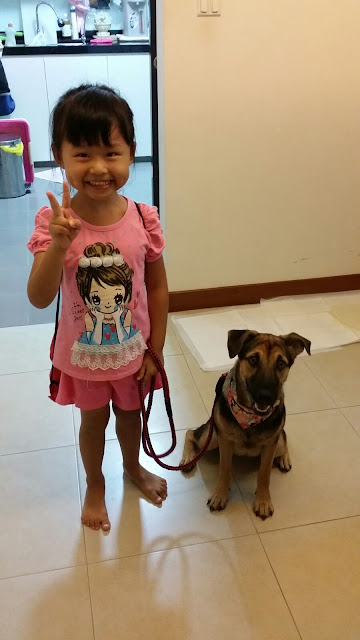 Taking care of a new puppy was never as easy as we thought it would be. They need to be fed every four hours during the initial stages, like a newborn baby. Ariel also had to learn her boundaries and we had to guide her to the correct places to poop and pee. The first two to three months were pretty tough and frustrating as Ariel could not seem to understand what we wanted. She would occupy the sofa, bark at us and pee and poop all over the house. We later on learn the benefits of crating her in a playpen and only allow her to roam certain areas of the house when she is under proper supervision. We also roped in the kids to assist in cleaning the mess which Ariel has created. The kids would initially give comments such as "smelly" and "yucky" and refuse to clean up. However over time, the kids learn that these actions are part of the responsibilities of owning a pet. It soon became a fun thing for our kids as they would fight over who dares to pick up the poop when we bring Ariel out for her daily walks. The kids have also taken up a role in supervising Ariel when adults are busy at home. Without realizing it themselves, Ariel has actually taught them a good lesson on commitment and responsibility. 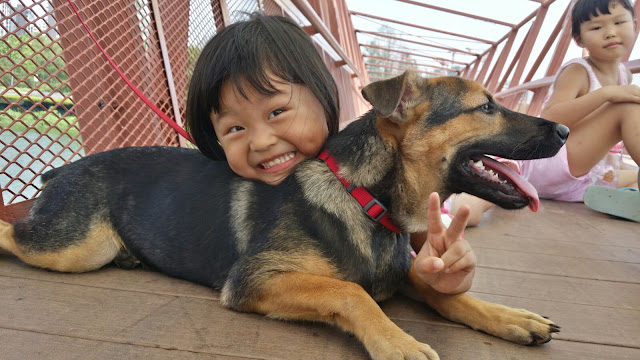 We recall an incident when we took Ariel out for a usual walk and there was this family with a kid walking towards us. The kid told her parents, "This dog looks so big and scary," and the parents pulled her away. At this moment my younger daughter, aged four, asked us "Why the family is so scared of Ariel?" We took this opportunity to explain to them the reasons why some people are afraid of Ariel. On different occasions, we ourselves as dog owners took up this role to share with others that dogs who are bigger in size may not be as aggressive as they are perceived to be. Nowadays, the kids will take the initiative to explain to other kids at the playground when they encounter such remarks. We are extremely proud that the kids have learnt to understand Ariel's behavior and explain the reasons behind it. 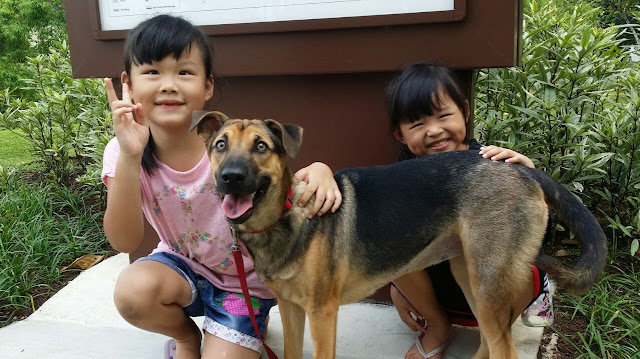 This little beanie has learn to accept her two human elder sisters as part of her family. They would play together, sleep together and even defend each other when they got scolded from us for doing something wrong. We consider ourselves lucky that we have adopted Ariel because the bond she created for the family is way more than what we expected. We're sure the journey of our family does not end here as there will be more challenges ahead when we grow old together. Ariel Beanie has definitely become a part of us, a part of our lives.