I was tasked to collect a carrier and fetch it to a cemetery where a young puppy, with skin problem, was waiting to be brought to a vet.
HOPE came to know about this puppy as they have just completed a sterilization project on Beano’s factory and have moved on to a new sterilization project for the cemetery dogs.
My job was just to transport the carrier from point to point and I would go home. Job accomplished. Or so I thought.
But it was not that simple. Just as I was leaving, Mr Ng, the caretaker at the cemetery, called to say that he had caught the sick puppy. I made a U-turn  immediately and met the puppy which Lisa would later name Oscar.
﻿﻿
﻿﻿

There were originally 7 dogs living in this cemetery. 4 adults and 3 puppies. Oscar had 2 other siblings but both of them died a slow death from the same problem that Oscar now faces. Had we known earlier, we might have been able to provide them with medical help. Sadly, we have just started on this sterilization project and just come to know about poor Oscar but we hope it’s not too late to save him. 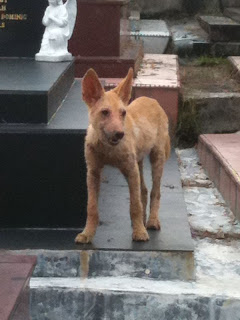 He lay in the cage with fear and sadness in his eyes, as if resigned to his fate. Mr Ng had helped to put him in the carrier and given him some biscuits but he was either too weak or too wary of humans, and didn’t show any interest in the biscuits. I could see that his skin was terribly inflamed, raw and sore and he was very sick. He needed immediate medical attention. I knew I could not just walk away. I called Lisa and we decided that he needed to see a vet immediately. I then drove for about an hour to bring him to the vet at Bedok. As I was driving, I could hear him cry and I could smell his sickness, sort of like rotting flesh.

At the vet's, he would not come out of the carrier. He needed to be coaxed with food to come out. At first, he was wary. He turned his head away. We spoke to him and the vet tech slowly got closer to Oscar and touched him gently on his head. Gradually, perhaps convinced that he would not be harmed, he turned to eat his food. He got out of the carrier he was in, hesitated and then decided that he was not that hungry to take further risk and retreated back to the carrier. The vet tech then crawled a little into the carrier and wrapped Oscar with a towel and carried him out. Oscar cried in fear. His eyes widened with panic and bewilderment. I was told he could only be about 6 months old.
The vet took a sample of his skin to test for mites and found that he has Demodex Mange or Red Mange. It is a common form of canine mange which burrow, feed and reproduce under the skin of dogs and usually signify an underlying immunodeficiency. Mange causes severe irritation with symptoms of inflammation, itching and hair loss. Once the dog begins scratching, soreness and redness begin to develop leading to crusty skin and scabs. I was told that in severe cases, when the immune system of the dog suffers because of any number of circumstances, it can be life-threatening. Oscar has rather severe demodex mange. His skin was terribly sore and oozing pus. I took a look at the mites under the microscope and there were many and they looked malicious.

Demodex Mange is not typically contagious from dogs to dogs or to people and can be treated. However, with Oscar’s severity, it might take months before we see positive results.
We are appealing for a foster to help care for Oscar till he finds a permanent home. If we can’t get a foster, we would have to return him back to the cemetery. He needs medication and care. We have opted to give him weekly injections to treat his mange as it is not possible to feed him daily medication at the cemetery. As it is, this little puppy hardly gets a regular meal living out in the wilderness. . . . . 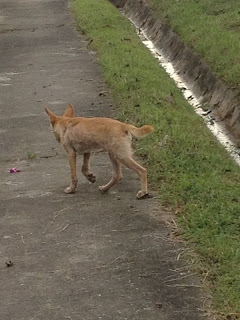 Oscar is my first rescue and long after I have left him, I could still see him and hear his cries. I know the reality is that if we can’t find a foster for little Oscar, he would be returned to the cemetery tomorrow. I fear he will not survive without proper care. He doesn’t even have proper shelter and food. I hope that he would still be waiting for me to pick him up for his weekly jabs next week, until he is stronger or better yet, we find him a foster who would nurse him back to health and perhaps a forever home.
Written by Lily Woon. Photo credits : Lily, Amanda Liew, Nicholas and Iris Ng
at 01:39