One day, my group of close friends and I were studying together at one of our friend’s house. We have all been very passionate about animals and especially more so for dogs because a few of us have pet dogs. We were casually talking about the dogs in our neighbourhood, when my friend mentioned that her neighbour on the 18th floor had a very cute Golden Retriever. Being such enthusiasts about dogs, we decided to visit the dog. 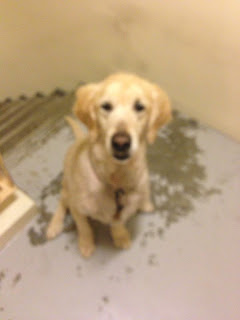 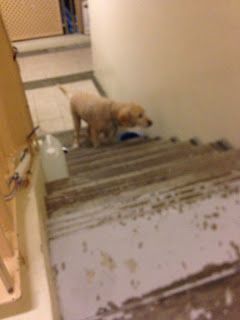 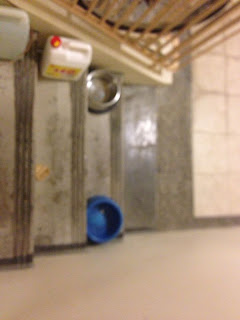 When we reached the corridor nearing the house, we were taken aback! There at the common staircase, lay a Golden Retriever who was being leashed by a rope to the staircase! It wasn’t even a proper leash, it was two tattered ropes joined together and tied to the staircase railing. His food and water bowls were empty. And the corridor floor was wet as a result of the rain before. His home was the staircase and the rain had splashed onto the staircase and flowed down the steps, making him cold and wet. It was obvious that the living condition was terrible.

Despite the torture and abuse, Rudolf was excited as he was wagging his tail upon our arrival and he didn’t even know us! He was seemingly too weak to stand up as he merely lay still on the ground. Our hearts were broken knowing his plight, however we could not do anything as my friend said that the owner wasn’t very friendly. We had no choice but to pat Rudolf and hoped that he would do fine. I couldn’t stop worrying about him after laying eyes on him. No dog or animal should be mistreated and be left to live in such an environment! Can you imagine having to succumb to such living condition and having no rights to protest or reject?
That night, I told my family about Rudolf and they were shocked all the same. How could some people just treat animals with no respect and love? The next day, my mother decided to visit him and her heart also sank when she saw him. She stayed there to play and talk to him, and you could tell from his eyes that he very badly wanted some form of love from human. The neglect he had to deal with for so long was really showing through his expression. After some time, the owner came out of the house and realized that my mother had been playing with her dog. The owner was a Chinese auntie, most probably in her 60s, and the first thing she said to my mother was “You think my dog is cute? You can have him!” The owner did not want Rudolf anymore and if no one was to rescue him, he would have just lived at the staircase till he faces old age and death; cold, wet and alone.
Through the conversation with the auntie, my mother found out that Rudolf was leashed to the staircase 24/7, come rain or shine, for the past five years! He is now 6 years old. His family had loved him for the first year of his life, after which they became too busy with work and decided to tie him at the staircase to live out his remaining years. When asked why they didn’t try to rehome him, they callously replied that they did not even have time for that!


Rudolf was strictly not allowed to enter the house and he even had his meals and baths at the corridor, on the staircase. It amazed us that none of their neighbours complained about his presence or predicament. Even his grooming was done by the helper by using a shaver, also at the common corridor. As a result, his fur was patchy from her shaving and blotchy from the wet steps that was home to him for the most part of his life. The only form of attention he had was when the helper brought him downstairs to do his daily business. It was obvious the only right thing to do was to call HOPE to rescue him.
Volunteer Sherry and my mother visited Rudolf’s owner the following day. They were told that Rudolf belonged to her son who was busy working and had no time for him anymore. She also told us Rudolf turned six this year and has been chained to the corridor in rain and shine for five years now, and she would love to give Rudolf away! It is depressing and appalling how people lose affection in their once dearly loved pets, and the extent of neglect they bring upon them subsequently. We have seen so many cases of pets being a victim of families who have welcomed a new baby at home, a broken marriage or simply irresponsible owners who decided overnight they had enough of their pets.

HOPE and my family claimed Rudolf the next night. The owners were so thrilled to be rid of him and even passed all his belonging to us. We were extremely relieved to see Rudolf finally freed from the cold, hard concrete forever, but at the same time, it was upsetting to witness the heartlessness of our humankind. If I could read an animal’s mind, I would tell you that Rudolf knew freedom and a new life was ahead of him because he ran, propelled and dragged us along with him in excitement, in relief, and in sheer joy. That moment freed my heart!
We examined Rudolf’s neck later on and saw it was all red and sore from tugging against the leash for five years, just so he could be close enough to the owner’s door to steal a glance at them.

Like all dogs rescued by HOPE, Rudolf has been to the vet for a thorough medical check and is in superb health except for ringworms, which will heal over time. It was no surprise since he lived on the corridor 24/7, and slept on the cold, dusty and wet concrete for over five years.
We named him Rudolf as it was around the holiday season that we rescued him. Rudolf is slightly overweight because he was tied to the staircase for years and the only exercise he had was pacing up and down the staircase. In fact, the steps and corridor where he lived had a darker shade from Rudolf’s constant pacing.

As it was late, Rudolf went to Sherry’s home for the night. As he approached her front door, he instinctively turned to the staircase to rest. That scene stayed in my mind for days and brought tears to my eyes because the staircase was the only home he knew! We had to explain to him that he no longer needed to sleep on the steps and lovingly took him into Sherry’s home. It was a heart breaking moment. 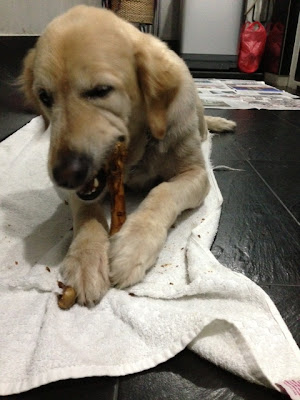 At Sherry’s home, she was amazed at how well behaved and gentle Rudolf was. He peed on the newspaper, was quiet and appreciative. Sherry gave him a big bone and the delight he showed was priceless. He gnawed on it for hours. It was Christmas for Rudolf in more ways than one! 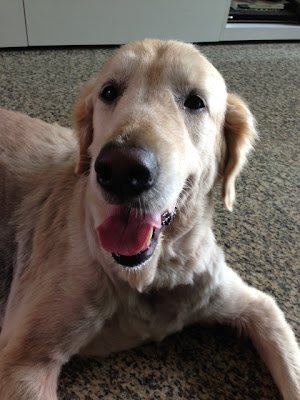 Rudolf is now temporarily boarding at a pet shop while we look for a home for him. Will any kind souls out there foster or adopt him? Boarding Rudolf at a pet shop is expensive and we would be most grateful if someone would come forth to foster him. 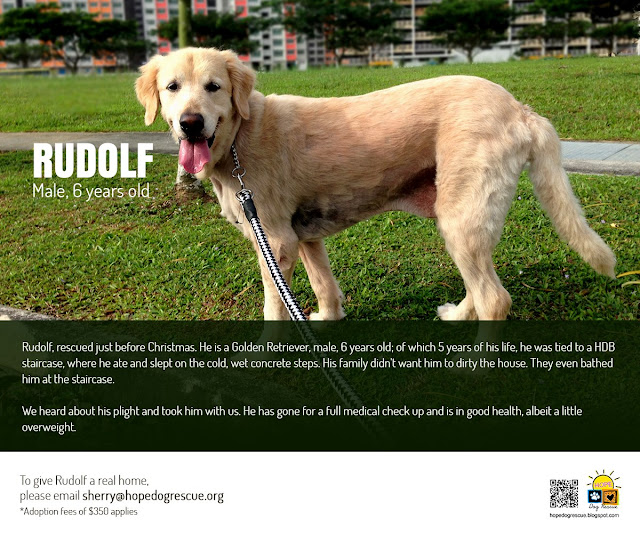 Despite the extent of his neglect, Rudolf remains a sweet, trusting, gentle and loving dog who is easily contented. Like any other Golden Retriever, Rudolf socializes well with human and other dogs and will be a wonderful addition to your family. To foster or adopt Rudolf, please email sherry@hopedogrescue.org

Rescuing dogs do not come cheap, from vet bills to boarding to the provision of food for the rescued dogs; it really adds up. And HOPE spares no expense in the dogs’ welfare. All rescue dogs are taken straight to the vet for a thorough medical check, which includes checking for tick fever, heartworm, kidney and liver functions, skin culture for ringworms, a check that their heart is functioning well, their ears for infection, eyes for their vision and if they suffer from dry eyes, as well as their teeth. Dental scaling is done in most cases as rescue dogs, especially those pulled out from breeding farms, are often in pretty bad shape. Before a dog goes to their new home, they are sterilized, vaccinated and microchipped.

On the average, we spend between $250 to $500, after discount, on each dog’s initial vet bill. The cost is also dependent on the dog’s age and health condition. All our dogs, once cleared of heartworm and tick fever, are immediately put on Heartgard and Frontline. This is our responsibility to the dog we have rescued, as well to the foster home that the dogs go to, as they may have dogs of their own, thus our dogs should not have any infectious diseases. Most importantly, these dogs rescued by HOPE have often had a hard, sad life and they deserve our very best, no less.

Please support HOPE so that we may continue to save more dogs.
at 03:03