It is "spring-cleaning" time of year, now that the new year is just around the corner; out with the unwanted. And to some heartless person, this dog got tossed out.

She is very skinny with her bones jutting out on various parts of her malnourished frame. Her nails are so overgrown that every step she took would have been agony. Both signs point to a long period of neglect before she was finally abandoned.


She was spotted by April, who saw her roaming the housing estate in search of food. Using bread as bait, they managed to put a leash over her head when she came near to eat. She gobbled down some bread and water and collapsed soon after, weak and tired.

She is not able to sit and cries in pain when she tries to sit. We thought perhaps with her bony frame, it was too painful to sit. Her underside is red and has no fur. She is also on heat and we hope that no male dogs have gotten to her yet.

She is very scared and is possibly in pain, so she growls when we attempt to touch her, though we managed to leash her and rush her to the vet.

At the vet, we noticed that if we raised our hands near her face, she would blink her eyes and back off, as if she had been beaten before. Having said that, she would wag her tail when we approached her, and by the end of the vet visit, she was leaning her head on our legs, craving for the touch that she probably never had. 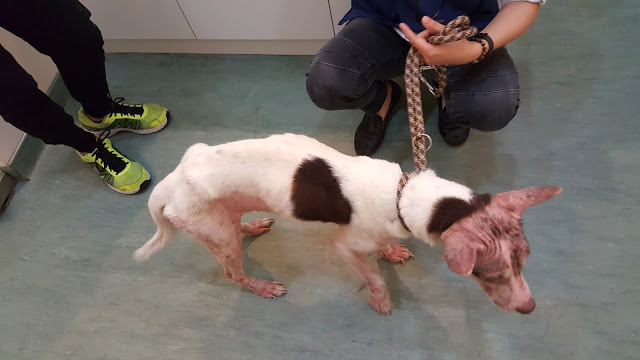 Her raw and furless skin makes her look old, but in actual fact, she is probably a pretty young dog. The vet that attended to her commented that she had such sad eyes; eyes that had never seen happiness.

She is severely malnourished, dehydrated, weak and in pain. She has been warded and put on fluid therapy. The vet tried drawing some blood from her but it was extremely difficult as her skin had hardened and thickened. Also she was so severely dehydrated that hardly any blood came out from her.


This morning she was rushed in for an emergency life-saving surgery. The vet had noticed that her vulva was producing an extraordinary amount of discharge and further checks showed that she has pyometra. Pyometra happens in unsterilized female dogs and is life-threatening if not treated. Usually dogs in heat are not operated on but because her life was at risk, the vets had to proceed. It is suspected that she may have had this condition for months and would have been a matter of time before it killed her.

Adora, as named by her rescuer, April, is safely out of surgery and has just woken up. If all goes well, she will be discharged tomorrow. Her vet bill, to date, is $3300.

Adora means "beloved one" in Latin.

She desperately needs help with her vet bills as well as a foster in two days’ time when she is discharged. HOPE is running on full capacity and can’t possibly take her in.

Please send an email to hopedogrescue@singnet.com.sg