A Moment Of Horror

Fiona had mentioned that someone had asked us for help to trap a badly injured stray. When she asked what type of injury, the reply she had was "the head is going to fall off". 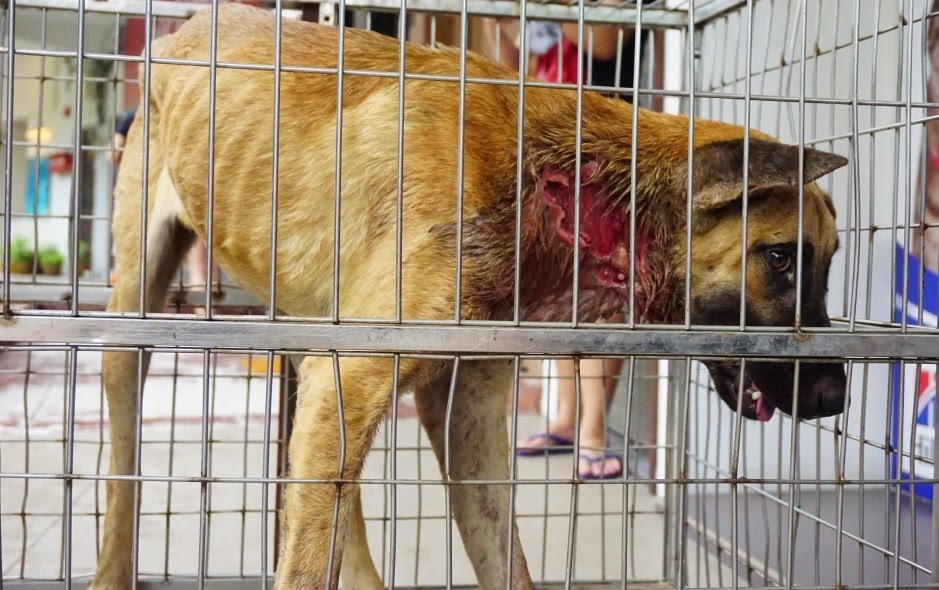 Cassie could best be described as a shadow of a dog. With protruding ribs and bones, there was hardly an ounce of flesh on her shrivelled body. It was heart-breaking to see that a dog could be this skinny. It was evident that poor Cassie had not had a decent meal for a long period of time. This was probably due to the fact that she was a meek and submissive dog and she had probably been bullied by the other stray dogs and even attacked by them which caused a gaping maggot wound on the right side of her neck, stretching to under her neck.
The skin on the right side and the underneath of Cassie’s neck was completely gone, and the flesh was revealed and festering. The maggot wound reeked of the stench of rotting flesh and was still dripping fresh blood while we were waiting to see the vet, even though the wound was already almost 2 weeks old. Imagine the pain, suffering and amount of blood she had lost for 2 whole weeks! In fact, the wound was so big that even the vet said that they had to wait for some scarring to occur before they could try to close it. Gigantic ticks were also falling off Cassie as we spoke. 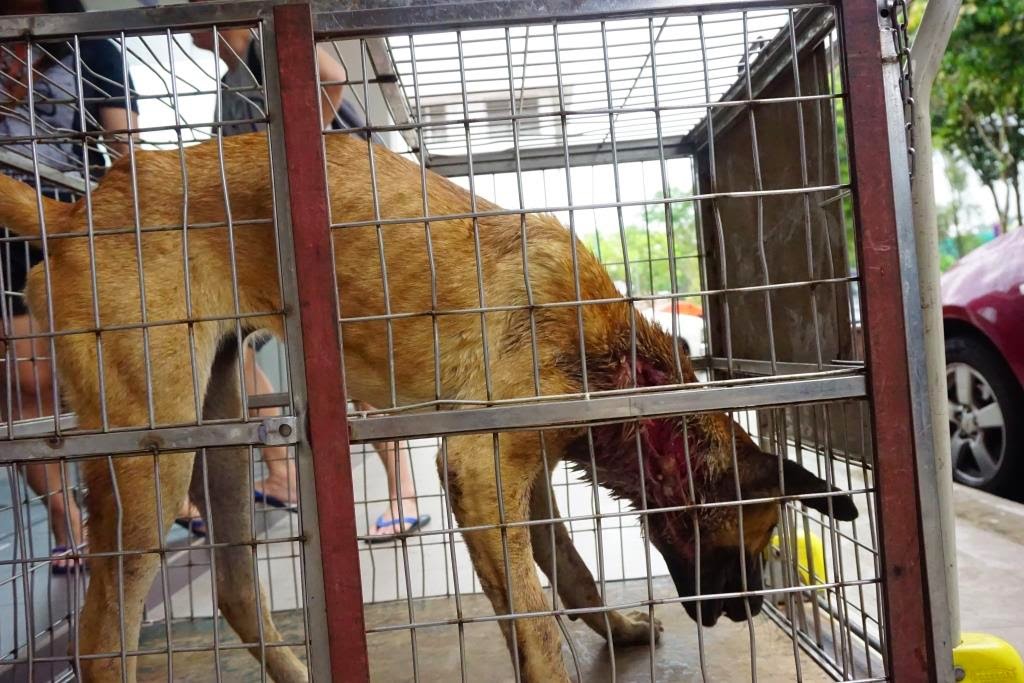 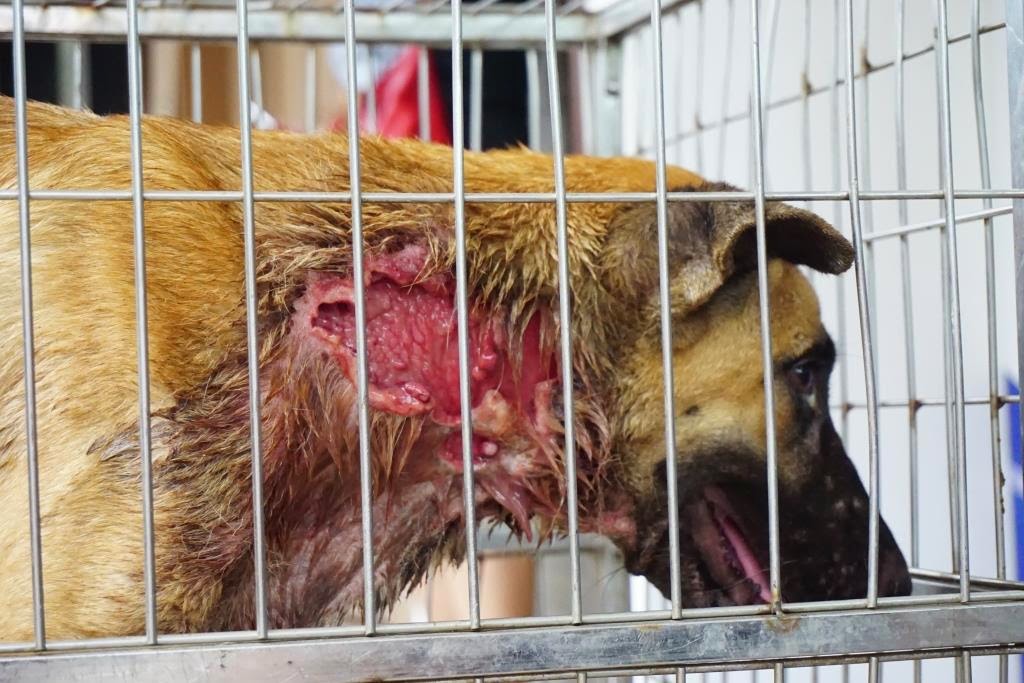 The state that Cassie was in was so appalling that all eyes were on her when we carried her into the clinic. Some people backed off at the stench that poor Cassie emitted. A few other people waiting for their turn at the vet asked us about Cassie and expressed their sympathies for her. 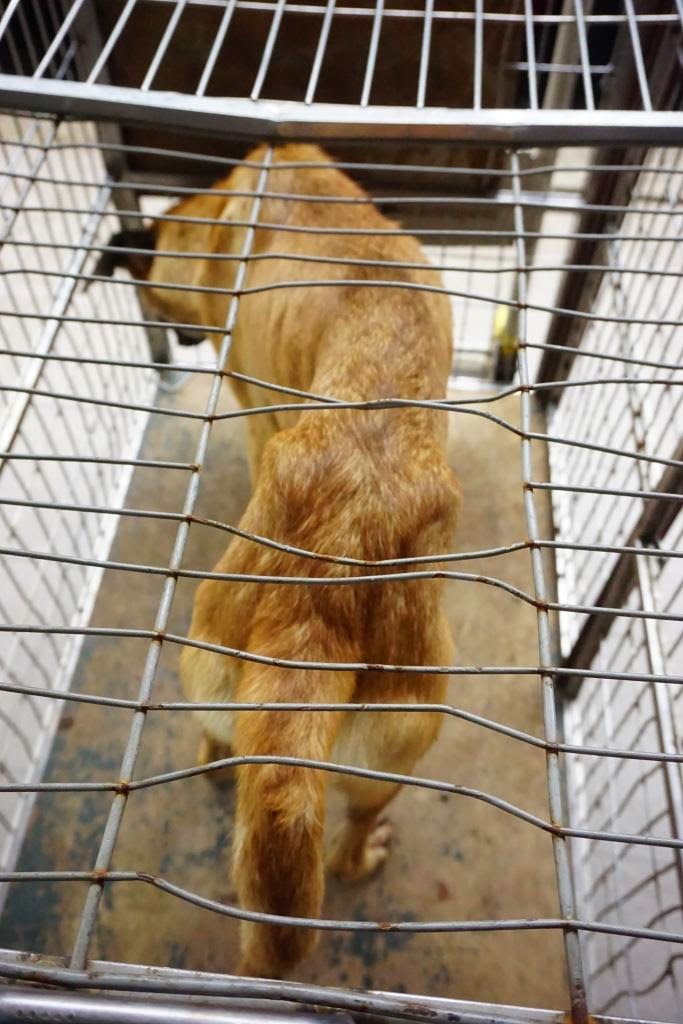 When it was Cassie’s turn to see the vet, she was extremely nervous and in extreme pain; to the extent that the vet told us that she had to receive general anaesthetic before they could further inspect Cassie’s wound and clean it. As the wound was too big, some scarring would have to occur first before the vet can attempt to close it. On top of that, they said that Cassie had to be sedated daily during wound cleaning as she was in too much pain. 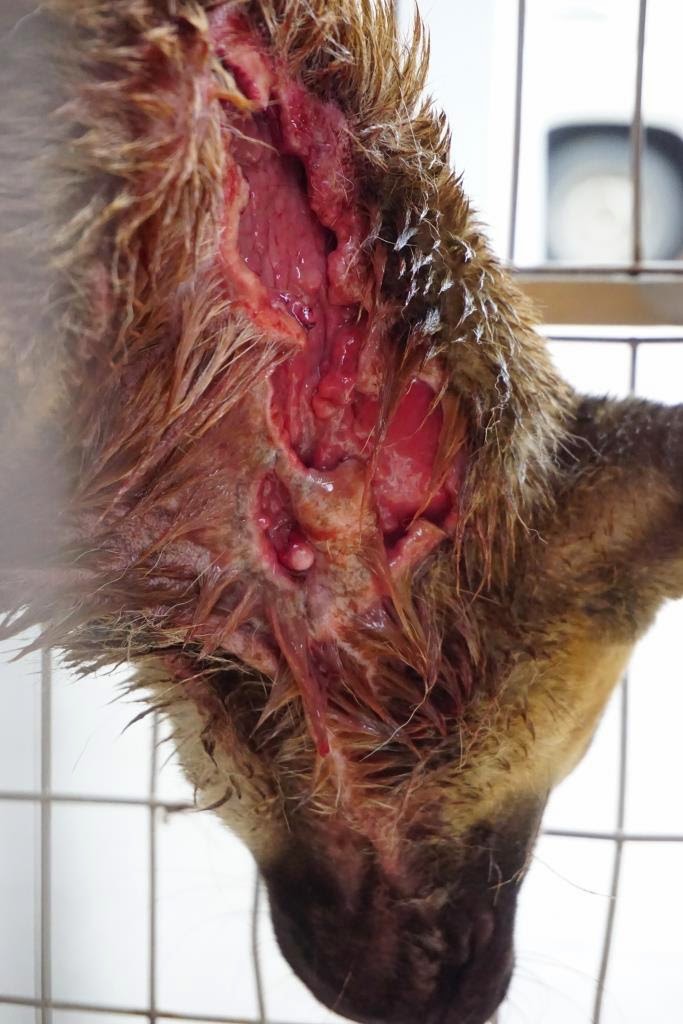 Strays really do have such hard lives. What if we never found her? What if we didn’t save her? The maggots would have continued to feast on her flesh till she eventually succumbed.
With the mounting vet bills that we have incurred after the recent spate of incidents, (Kate, Ah Mei, Dawn, Bobby and now Cassie) many would probably ask why we do not choose to put down dogs with wounds as severe as Cassie’s. Yet how could we? It is incredible that Cassie had survived for so long with such a huge wound and it showed her strong spirit and her will to live. How could we possibly give up on her when she had not given up on herself? How could we trap her, send her to the vet and put her down? That would mean giving her false hopes and letting her down. Cassie is estimated to be less than two years old and yet she has already been through so much pain and suffering, more than any of our pets would ever go through in their entire lifetime. The vet has estimated that Cassie’s wound would take many weeks to heal due to the severity of the wound. Yet what about after recovery? Cassie would probably need a foster after her wounds have started to heal. A foster to show her the love that she deserves after having led such a short yet tough life in the wilderness.

We appeal to everyone in helping out with Cassie’s vet bills as Cassie would need to be at the vet for quite some time and the recent spate of incidents have left us stretched to the limits. 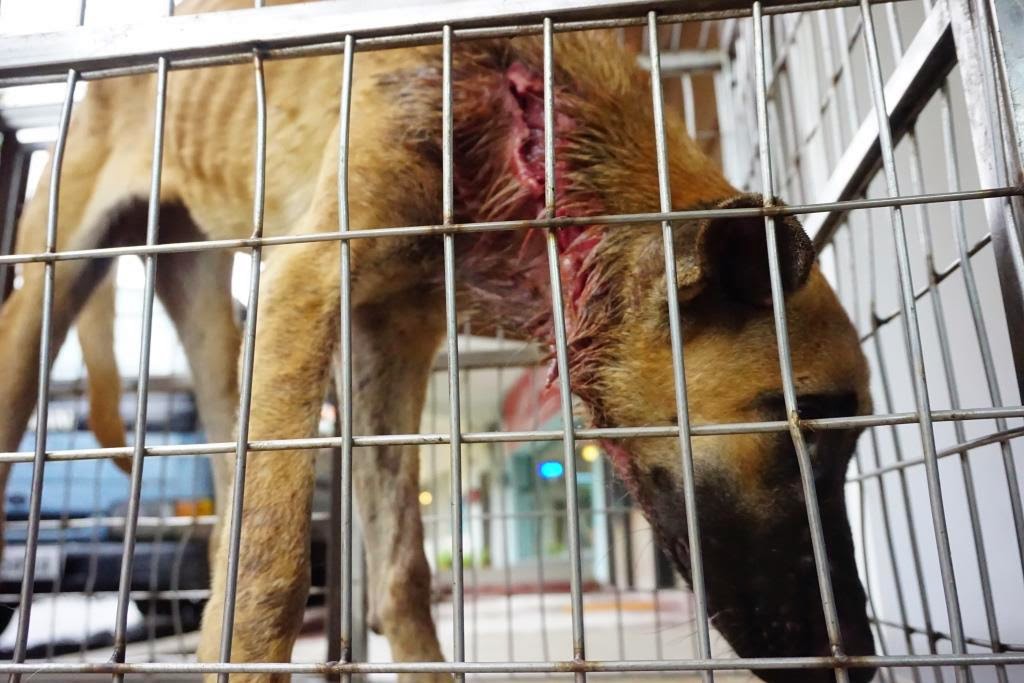 Would we say that we are doing enough? Probably not but with limited funds and 17 dogs now in our charge, our hands are tied. In fact, as we speak, we have been told that 2 other strays are badly injured and yet, it hurts us that we have to turn a blind eye on them because we can no longer afford to save any more dogs. We have asked the individual feeders to try approaching other animal welfare groups for help, but they have told us that no one responded to their plea.

We always try our best to help dogs that require our help; and all of these would not be possible without the help and support we receive from generous dog lovers that have believed in us in so many ways possible and we thank you all from the bottom of our hearts.

To help in any way you can, please email hopedogrescue@singnet.com.sg