In a short span of three weeks, we have seen so many cases of neglect, abuse, torture, abandonment and animal cruelty. WHY?? Why this senseless behavior? What has our society come to? In just a few weeks, it has been one pain after another; from Prince’s neglect and abuse, to Babu Boy’s irresponsible hit and run accident, to the dogs’ whose tails were cruelly chopped off, to Beano. 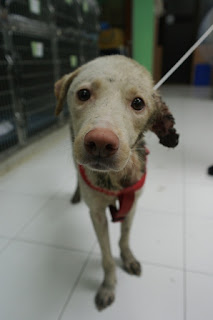 
The first time (should be mid-April) I come to know about this white dog was my hubby telling me that he saw someone throwing water on the dog to chase him away from their premises. He told me that the dog has a big wound on his neck which he can see from a distance. Everyday I try to search the surroundings for this dog but he never appeared.

There was a night when we are working late at the workshop when I heard the dogs barking loudly. Seems like a dog fight going on so I went to investigate. The other strays are chasing the white dog and he was hiding in a corner. I bought him some dried food and he finished them quickly. Thought he might still be hungry so I proceed back to get more food for him. He was waiting outside my office but this time round, he did not finish the food. He seems to have difficulty swallowing the dried food. After eating, he left without saying good-bye. Days by days goes by, the white dog will drop by my office late at night (11pm-midnight) for food and as usual, he will go away once he finish his food.

This goes on for a week and I started to cook rice to mix with canned food for the white dog. As he eat, I will apply the medicated powder on his wounds. He seems to know that I will not hurt him and he moved to sleep below my office (container). He will sit outside my office if I’m around. His wounds getting better and better.


For the past week, I am not in office during the day but I will still go back in the evening to cook for the dog. However, the white dog is not around anymore and I ask my neighbours and they did not see him too. Told my neighbours to keep a lookout for him and they told me that they have seen the dog running in fear during the day. He did not come back to his resting place which is outside my office. I was in office this afternoon and was talking to one of the tenants. I was asking her if she has seen the new born puppy and she was a kind lady, an animal lovers too. She has taken care of the puppy in her office and was showing me when she suddenly remembered that white dog that I had told her about. She told me that she has seen the dog today and the wounds is so scary that she don't dare to approach him too.

I search for him again but I did not find the dog. This evening as I was preparing food for the other strays, I heard my hubby calling me in a hurry. "Quick, quick....The white dog is here !!! I step out of my office I received a rude shock ! The wounds has gone so bad. Seems to be wounded by dog fights as I can clearly see teeth bites marks on the body. Worst part, he got bitten at the part where it is already wounded.

The 1st time when I see this dog I was too scare to do anything for him except to give him food. I was thinking his wound would heal if he eats well but things don't go the way I expected. After a few days of feeding him, I got adapt to seeing his wound and start applying powder to the wound. This time round, it is too scary even for me too.

Beano had chemical burns on half of his head. Some cruel person had poured acid on him and the liquid had burnt his head, his left ear and parts of his neck, as it flowed down. Imagine the excruciating pain he had been living with for almost three weeks before we saved him.
It was 8.30pm when I arrived at the construction site. When I saw him, there were still stains of this dark coloured liquid on his fur, covering his neck and head. It was pitch dark but I could smell the maggots from a few feet away as I approached him. Having worked with strays, this was unfortunately, a smell I was very familiar with, and obviously not something I liked. The dog was emaciated, bones protruding from his skeletal frame. Being small and weak, he was not part of the pack of stray dogs that hung around that area. And as such, he did not get to share their food and was constantly attacked and bullied by them.
﻿﻿
﻿﻿Despite the fact that his pain was unbearable and that it was obviously inflicted by humans, he wagged his tail as this human got closer to him. He still trusted this inhumane breed.
It was easy to catch him because he was starved and all I needed to do was put some canned food into my carrier and he went right for it. I loaded him into my van and rushed to the Mt Pleasant Hospital. It was emergency hours and would have cost more to take the dog in but I felt he had suffered long enough and it couldn’t wait till morning.
﻿﻿﻿﻿﻿﻿﻿


At the hospital, with proper lighting, I finally had a proper look at him. He must have lived one of the saddest existence. Suddenly I didn’t feel so strong . . . . .his eyes were trusting but it showed the hard and sad life he lived. He was a mere puppy, he couldn’t have been more than a year old!


As he stepped out of the carrier on his own, his pain and suffering hit me hard. Pus was oozing out of his wound, maggots were crawling all over his wound and his tiny face. There were holes when there should have been flesh. I saw bubbles on his head and I knew maggots had burrowed through and eaten away his flesh. His left ear was distorted with parts of it missing, either from the chemical burn or from the flesh eating maggots. A lady who had walked past us on the way out after visiting her dog, stopped to stare at him. Immediately her tears flowed as she knelt down to ask me what happened. I explained and she asked why? Why are people so cruel? Despite the smell of rotting flesh and the maggots on his head, she hugged him. He lay his head on her knee. All he wanted was love; someone to understand what he had gone through in his short life.


Watch Beano here
http://www.youtube.com/watch?feature=endscreen&NR=1&v=dWbQXaK2Ozs%2024643848%7Dmid://00000299/%21x-usc:http://www.youtube.com/watch?v=lPilXCEqJdI&feature=youtu.be
The vet on night shift came and looked at him and commented he was terribly thin. She looked at his huge wound and said she needed to sedate him to flush out the maggots and the chemical. It would have been too painful to clean without sedation. I requested that she flush his eyes too, in case the chemicals had also splashed on his eyes. Fellow volunteer, Lisa, rushed down to visit little Beano before he was sedated to have his wound cleaned. She cried when she set eyes on him. She too, knelt beside him, and kissed his little nose. Barely a year old, and life had not been kind to him.


Watch Beano here http://www.youtube.com/watch?v=lPilXCEqJdI&feature=youtu.be
Beano is expected to be at the vet for at least a week to ten days, where his wound would be cleaned daily and maggots flushed out. We won’t be returning him to the streets as obviously, he would not survive. He is small in built, not like a typical local breed. He could easily live in a HDB apartment and be approved. 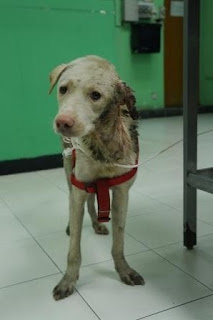 In the next day or so, we would need to decide if we want to leave his wound to slowly heal on its own, which may take up to two or three weeks, or to have him undergo a surgery to stitch up the wound. Either way, he would be left with physical scars of human abuse, but we hope, with our love and care, he won’t have scars of his emotional abuse. 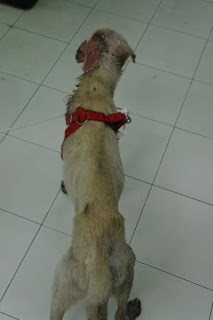 I sense that he might have been kept as a pet and then abandoned as he walks very well on harness, from the night we rescued him, he knows “sit” and he loves treats.
Why do I open my heart to dogs in need? Especially when sometimes there is no more money, no more fosters and no more space to help. Every dog that crosses my path, I think of them as “my dogs” and I open my heart a little bigger, I stretch the money a little tighter, and I plead for just a little more room, a little more hope, to save one more dog. The gratitude and love that reflects in their eyes, is the best assurance that I did right, in the best way I know how and it reminds me to go on trying, to go on saving.
I feel good saving lives but I would feel even gooder if you would give sweet Beano a real life. He deserves to know love. 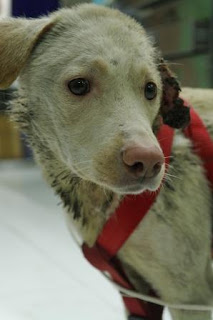 Beano is warded at Mt Pleasant Veterinary Centre (232 Whitley Road).  To foster, adopt or help with his vet bills, please email fiona@hopedogrescue.org
at 22:40