21 April, 2012. Saturday
“Dee, Dee, Dee,” went my handphone in the dead of the night. It signalled an incoming SMS. “Male dog had a serious accident.” “Call me if u wan to know more,” stared back at me. The message was from John, Babu Boy’s feeder. Waves of panic seized me. My hands trembled as I waited for John to answer the call. John related that Babu Boy was involved in a hit-and-run accident about 5.30pm at a bus stop. This was the place where Babu Boy and two other female strays had called their home for the past 4 years.

A couple who happened to be passing by, called the SPCA. Upon hearing the loud bang, a few Indian workers from the worksite rushed over. They had recognised Babu Boy as one of the dogs from their worksite. He had been hit by a car and dragged a short distance, sustaining a broken leg and multiple scratches and burns from the rough gravel road.

Babu Boy was out cold for an agonizing five long minutes. Babu Boy finally stirred and attempted to stand but failed. The Indian workers stayed by Babu Boy’s side until the SPCA came an hour later to pick him up.

22 April, 2012. Sunday
A little after twelve midnight, John did his routine feeding of the three stray dogs. Upon learning that Babu Boy was at SPCA, John and two Indian workers rushed to SPCA. The three men had saved Babu Boy from the ‘gallows’.

At the crack of dawn, I rushed over to the worksite. My heart sank when I saw Babu Boy. He was confined in a squalid and stuffy room. Being Babu Boy’s relief feeder, I had not seen Babu Boy for quite a while. He had put on a substantial amount of weight due to the unhealthy diet of discarded chicken necks. The amount of fat lying below the skin of chicken necks can be quite shocking. Such injustice had been done to the dogs by feeding them with nothing but fat and skin.

It was anguishing to see Babu Boy’s left hind leg jutting out awkwardly. I knew it was broken. Despite all this, Babu Boy lumbered towards me on three legs. The fracture leg was limp and was swinging like a pendulum. What I saw greatly distressed me.

John instructed me to apply Hydrogen Peroxide and to sprinkle some pinkish DD powder onto the raw wounds. The wounds on Babu Boy’s ear, mouth and underside of the neck were probably sustained when he grazed himself on the rough asphalt road. John hurriedly instructed what I had to do when he was away for a 9-day overseas working trip. John mentioned that Babu Boy was a strong dog and hopefully the leg will heal by itself. Sadly, I was equally ignorant to believe it will heal by itself.

23 April, 2012. Monday
On arriving at the construction site, I was unable to locate Babu Boy. According to the workers, Babu Boy had not been sighted the whole day. With the female dog’s help, Babu Boy was found hiding below some heavy metal sheets. Even the aroma of Babu Boy’s favourite chicken drumsticks had failed to lure him out. His wounds were now covered with clumps of mud. The pain must be unbearable for Babu Boy. However, I could still spot a faint wag on his little tail.

24 April, 2012. Tuesday
Today was no different from yesterday. Babu refused his drumsticks as well as the canned dog food which I had offered. I knew that I had to seek treatment for Babu Boy. Being a pauper, I had no money and no car at my disposal. I was at wit’s end.

25 April, 2012. Wednesday
During a casual conversation with another feeder by the name of Jennifer, I related Babu Boy’s plight to her. That set off a whole chain of events. Miss Jennifer had contacts with other feeders. After many phone calls, she telephoned me and said HOPE Dog Rescue could help. There was a gleam of hope after all.

26 April, 2012. Thursday
Lisa, a volunteer from HOPE Dog Rescue contacted me. She made all the necessary arrangements for Babu Boy to be transported to Mt Pleasant Animal Hospital at Bukit Merah View. 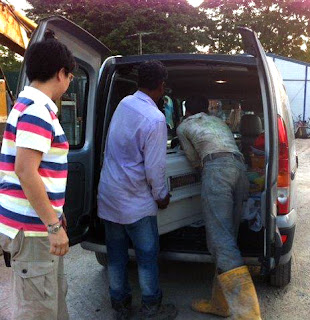 A foul, rotting stench filled our nostrils while we were in the van. We later found out that the repulsive foul smell was from the festering wound below Babu Boy’s neck.

The vet estimated Babu Boy to be about 5 to 6 years old. An X-ray taken showed that Babu Boy had a tibial fracture. We were concerned about internal bleeding too, but luckily the doctors assured us that his blood count was stable, showing no signs of internal bleeding.

27 April, 2012. Friday
Babu Boy was conveyed to Mt Pleasant Animal Hospital in Whitley Road. After consultation with the vet, surgery was scheduled for the next day.

28 April, 2012. Saturday
The surgery was performed by Dr Dennis Choi. It took almost 3 hours, which was much longer than expected. The initial x-ray had revealed 2 broken bones, but when they operated on Babu Boy, they saw that his bones were in fact shattered, with bone shards embedded in his flesh. Dr Choi screwed a steel plate into his bones to hold them in place. It seemed like eternity, but in the evening the operation was finally over. A hardy and brave dog like Babu Boy had pulled through. I heaved a sigh of relief.

29 April, 2012. Sunday
John returned from his overseas trip. I related everything to John. I thought he would be extremely anxious. To my dismay, he was not or may be it did not show. I SMS him that I would be visiting Babu Boy at 1 pm. I invited him to join me. He said he had some personal matters to attend to. He told me that I better start off immediately since it was already 12 noon. He made no indication that he will visit Babu Boy. I felt my heart drop to my knees.

Lisa, the volunteer from HOPE Dog Rescue called to inform me that Babu Boy was not eating. I cooked Babu Boy’s favourite chicken drumsticks and dragged my heavy feet to the Animal Hospital.

My heart broke into pieces when I saw Babu Boy. The was a forlorn look in Babu Boy’s eyes. Even the wag on Babu Boy’s little tail had disappeared.

Probably, Babu Boy feels abandoned by his feeder. If Babu Boy could speak, he would want to know why his feeder is not keen to visit him. I will continue to visit Babu Boy until he fully recovers. Otherwise, my conscience will prick me for not being present when Babu Boy needs his feeder’s care and support.

Babu Boy's surgery was estimated to cost $2500. Although it was expensive, it was impossible for us to say no. Babu has no owner to love and care for him. We couldn't have just left him lying in excruciating pain with his multiple wounds, hiding in the construction site, as he had done for 6 days before he was brought to our attention. We didn't want to follow the common practice either - to condemn him to death just because he was a stray and no one's responsibility. We didn't want to take the "easy way out"; we were determined to help Babu get better. We have always had a soft spot for street and breeding dogs and it was the least we could do for Babu Boy. We were sure there would be many kind-hearted people who would help us to help Babu.

Babu Boy is currently warded at the vet and recovering from his surgery. Although he is tired from his life on the streets, sleeping on filthy gravel and sand all his life, he does miss the workers at the construction site where he stayed. They were kind to him, and he sat with them during their free time while they rested and chatted. Even though he couldn't understand a word they were saying, he enjoyed their company and he felt he belonged.

Now, he feels that nobody wants him, and that he is a burden to us. He has never been off the streets before, and he is wondering why he's there at the vet. He has no idea what is happening to him. He is refusing to eat because he is depressed and in pain. He will be staying at the vet till Thursday or Friday, depending on how he is feeling, but the most important thing right now is to get him to start eating again.

We are in need of funds for Babu's vet bill. If you would like to help, please send a cheque to Mount Pleasant Animal Hospital at 232 Whitley Road, S297824. Please issue the cheque to Mount Pleasant Veterinary Centre (2008) Pte Ltd and write "HOPE Dog Rescue, Babu Boy" on the back of the cheque. Please note that any funds in excess of the balance will be carried forward to help other animals in need! Thank you for your kind understanding.
at 00:42