It has been almost 3 weeks that Cody has been at the vet.  He was among the few "lucky ones" that was picked up from an estate that had a high culling rate. He was “fortunate” to have an open wound injury and thus was taken to the vet. He could have been the one that you have made numerous calls to the authorities to trap and cull. In the area where Cody came from, 16 dogs had already been trapped and probably culled from residents’ complaints.

When we rescue an injured stray, the normal practice is to treat and release them back to where they originally came from, after the dog has recovered fully. During their stay at the vet, we will also spay or neuter them, ear-tip and vaccinate before they are discharged. We will only keep them under our care if they can no longer survive as a stray, such as an amputation, or a very old and sick dog. We would love to keep every dog we rescue, but HOPE does not have a shelter, neither do we have the funds to upkeep so many dogs. (We have 18 at the moment).

Cody is a male local dog, estimated to be about 3-4 years of age. Like most stray dogs, he gets really frightened and fearful over the slightest sound or touch. While we were waiting at the vet, even when a tiny Jack Russell Terrier barked out of agony at the clinic and not at him, he tucked his tail and hid in a corner trembling.

In the consult room, he curled up in a corner while waiting for the vet to see him and the vet commented that poor Cody had such a low self-esteem and that he looked as if he wanted to hide and disappear from the face of the earth.

Releasing him back would mean Cody may get attacked by other dogs again because he is so fearful and timid. It would also mean risking him getting culled by the authorities rounding up strays in that area. What are we to do? Treat him, release and risk getting trapped and culled? Or to have ignored his injury, let his wound fester and die a slow painful death? Sounds like a terrible question to ask, but in reality, that’s what we face with every rescue, almost every other day. 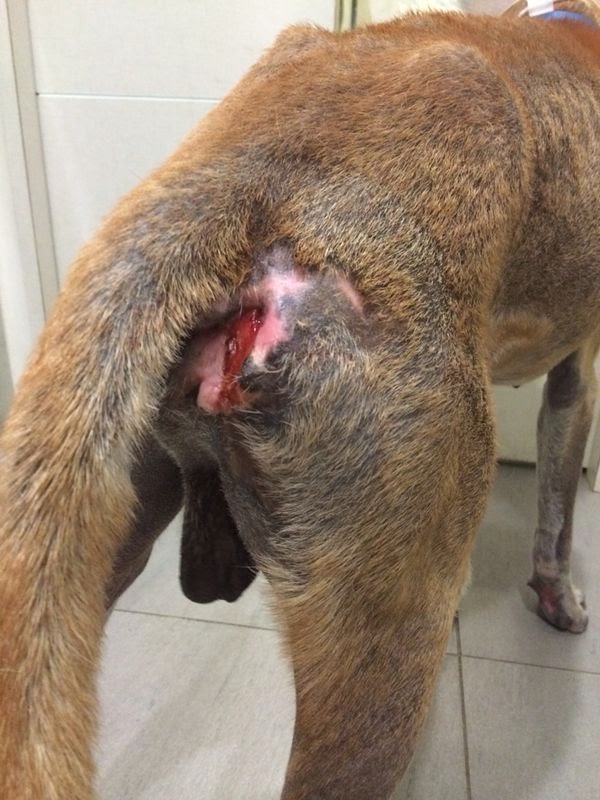 Cody’s wound needs another week or so to completely close up. If you able to provide a permanent home for Cody, please email us and save his life. Email hopedogrescue@singnet.com.sg
at 15:10